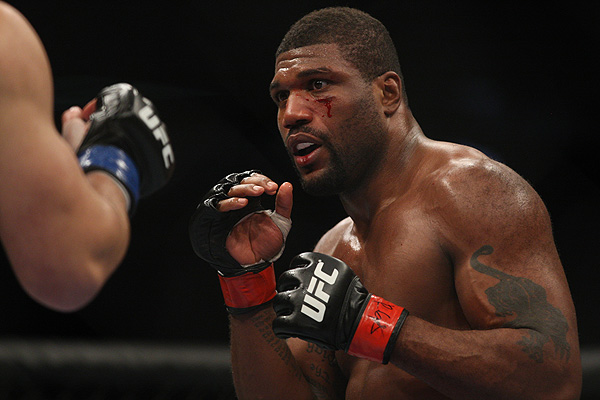 When Viacom presented Quinton Jackson with the opportunity to fight in Bellator, wrestle in TNA and have his own reality show on Spike TV, “Rampage” signed with the company and his exit from the UFC was complete.

In a recent interview with the Sherdog Radio Network’s “Beatdown” show, “Rampage” discussed that decision and much more.

On his issues with the UFC’s sponsorship polices: “I know exactly when I lost the love for MMA. … The fight that I had wasn’t a fight inside the cage. The fight was with the people that’s running the cage. This is the thing that fans will never understand because they’re fans. They’re not the ones who actually put in their blood, sweat and tears and get injuries every day in training. This is the thing: A lot of professional athletes make more money off of endorsements than they do actually playing basketball or playing golf. Tiger Woods is a billionaire from all the endorsements that he did, but the UFC won’t let you have the endorsements you want. They just don’t allow it for whatever reason that they have.”

On the importance of sponsorship money: “When you’re trying to prepare for a fight, you’ve got to spend your own money on your training camp and stuff like that. A good training camp will cost you [$100,000]. If it costs you [$100,000] for that training camp and then you fight and you make whatever you make and then taxes come out and stuff like that, a lot of times you come out losing a lot of money. You kind of lose the love for it. You’re like, ‘Why am I doing this? I’m not appreciated.’ You take a fight injured. You don’t back out of the fight because if you back out of the fight, it messes the card up and then the promotion knows you’re injured and they still talk s--t on you. You just lose love for it. But when I talked to Bellator, they were like, ‘We’ll get you endorsements. You can have any endorsement you want. We’ll help you get some.’ … They were like, ‘We don’t care how much money you make off endorsements. We want to help you.’ That’s what got the love back for me.”

On money: “As fighters, we have to fight for money because our bodies are going to be really messed up after we retire from fighting. We’ve got to make as much capital as we can make now so we can save up when we retire for the rest of our lives.”

On the popularity the UFC helped him achieve: “I don’t think I would have got the ‘A-Team’ movie if people didn’t know who I was from the UFC. I was fighting in Pride for years and I couldn’t even get sponsors because Pride, the way they was with me, they didn’t give me any Japanese sponsors. I don’t know why. They had their reasons for it, and then in America I couldn’t get any sponsors because Pride wasn’t really mainstream TV. … A big blockbuster movie like ‘A-Team,’ I got that because I was in the UFC, and a lot of other deals I got because I was in the UFC. I’m very thankful for the platform that the UFC gave me. I’m just really, I’m kind of like sour that the UFC had a person like me who’s very loyal -- I’m a wolf, I’m very loyal. I would have done whatever I had to do to put butts in those chairs and make a real exciting fight. I’m just kind of sour because I was treated the way I was treated. I just felt like I wasn’t appreciated as much as I should have been appreciated.”

On his relationship with Dana White: “Dana’s actually a cool guy. Dana is really down to earth. He’s actually really cool, but sometimes when it’s business, it’s business. Dana, you can tell that he’s a strong businessman because look what he’s done with the company. Sometimes he gets a little bit too emotional with his business, and that’s what makes you have a bad attitude toward Dana. With me, when Dana gets upset, he comes at me and says something, and I’m an alpha too. I say stuff and we get in an argument and then after a while, I’m cool with it. I don’t hold grudges.”

On parting ways with the UFC: “Now I’m kind of happy that that actually happened because even though the fans don’t understand it, they don’t see it, but I think Bellator is actually going to come up. You’ve got to think about it. Spike TV is what made the UFC. The UFC wouldn’t be where it is without Spike TV.”

Listen to the full interview (beginning at :54).
<h2>Fight Finder</h2>
Sponsored by