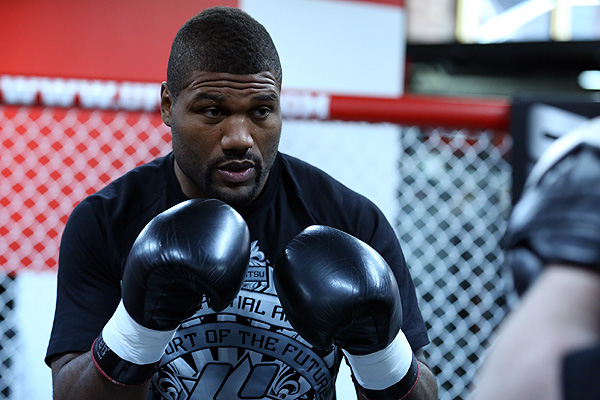 Quinton Jackson plans to fight in Bellator and also do pro wrestling by the end of the year.

In a recent interview with the Sherdog Radio Network’s “Beatdown” show, “Rampage” discussed his future with Bellator, TNA and much more.

On pro wrestling: “I did not leave MMA at all. I just changed organizations. I went to Bellator. I did a deal with Viacom, and Viacom owns a lot of TV stations and different things. TNA is on Spike TV, so I did a deal to do MMA fights with Bellator, pro wrestling with TNA, and I did that just so I could reach out to a larger audience. Plus, to all the people that called me a sellout, I think I’m the sellout for going to MMA first because I was always a pro wrestling fan. That’s why I fought the way I did when I was younger. That’s why I did the powerbombs and the slams and all that, because I’ve always been a pro wrestler at heart.”

On TNA: “The reason why I went to TNA instead of WWE … is because TNA is under the Viacom umbrella and TNA has got Hulk Hogan and the other cool wrestlers, like Sting and everybody, and I actually like TNA. I like the format. I like how friendly they are. … I have nothing against the WWE. … They’re cool. I just feel like I fit in more with TNA.”

On getting a reality show and acting: “I couldn’t pass up on that dream to do pro wrestling, and Viacom gave me my own reality show, which starts shooting very soon, and Viacom [owns] Paramount Pictures, and they’re going to have me doing movies. The first movie I’m doing is the one I wrote.”

On his movie: “I’ve seen a few MMA movies out there and I just wasn’t happy with the way they portrayed MMA period and the fighters. They just didn’t hit the true essence of what it takes to be an MMA fighter. Me being an MMA fighter -- I’ve been in it for 12, 13 years -- I decided to make a movie [about] something that goes on with me and just some other parts of MMA that people don’t really talk about. I made a movie about the brotherhood and stuff in MMA and the inside and how the promoters are.

“I think the script is really good. … I let a couple of people read it and they were like, ‘Wow.’ A lot of people think it could be kind of like a type of MMA movie that people could really attach themselves too and make a couple of sequels from it. … I just want you guys to know I’m sitting down with a professional writer, somebody that can help me write it and bring it to life a little bit more because I’m not a writer.”

On his reality show: “It’s going to be a lot of lifestyle. I’m going to let you guys into my house with my kids and what goes on there and stuff like that. I’m going to let you guys see a little bit more of my training. Normally the only times you guys see me training is like the countdown stuff, and all that stuff is basically what we want you guys to see, but a reality show is reality. It’s going to be real; you’re going to be able to see what really happens in my training. … Everything goes. Then you get to see my nightlife.”

On Bellator and CEO Bjorn Rebney: “Bjorn Rebney, he’s like one of the best promoters I ever met. The guy’s super cool. He understands fighters. It’s like the guy gets it. It’s like he used to be a fighter. It’s kind of like Nick Diaz doing his own promotion. … I would fight for Nick because he’s a fighter and he knows how to treat fighters. Bjorn Rebney’s like that. That’s why I made the move that I made. I did not quit MMA. I’m still fighting. I will fight before the year’s over with and I will do pro wrestling as well.”

Listen to the full interview (beginning at :54).