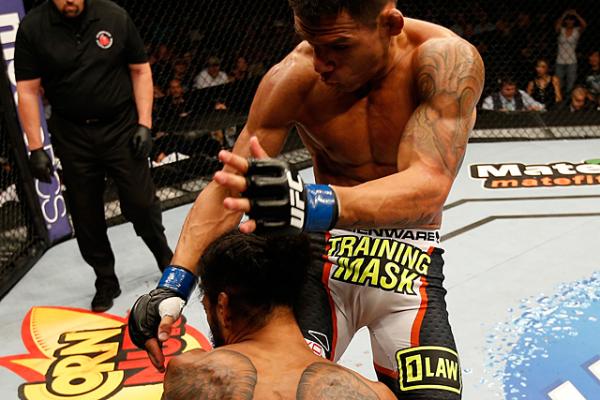 In his first headlining appearance in the Octagon, the Brazilian emphatically dispatched main event veteran Benson Henderson, winning via knockout 2:31 into their UFC Fight Night lightweight feature at the BOK Center in Tulsa, Okla., on Saturday night.

“I’m always the underdog,” dos Anjos said. “I think tonight I proved [myself] to everyone. Benson Henderson is a great champion, and I respect him a lot. Now is my time.”

At no point did dos Anjos appear in over his head against the former 155-pound king. The Kings MMA standout landed effective counter punches and punished “Smooth” with hard kicks to the body throughout the abbreviated contest. Henderson had his moments, including a push kick that momentarily knocked dos Anjos off his feet. However, it was the underdog who authored the bout’s defining sequence.

Dos Anjos (21-8, 10-6 UFC) put Henderson on his heels with a straight left, then rocked the MMA Lab stalwart with a flying knee. Henderson responded by shooting for a takedown, which was easily stuffed. Upon returning to his feet, a left hook from dos Anjos immediately took Henderson’s legs out from under him. That was enough to bring John McCarthy into the picture, as he halted the bout before dos Anjos could do any further damage.

“I was training for everything,” dos Anjos said. “I worked a lot on my striking, and I knew my striking was better than [his]. The plan was be patient for the first round, but throw hard -- that’s what I did.”

Moments after the fight’s conclusion, Henderson (22-3, 9-2 UFC) returned to his feet in disbelief, apparently unhappy with the stoppage.

“I thought I was clear headed,” he said. “It is what it is. You have the ups and downs. You’ve got to take the good with the bad.”

Dos Anjos now has 11 UFC victories at lightweight, tying him Donald Cerrone and Melvin Guillard for third most in lightweight history. He was won six of his last seven in the Octagon overall, with the lone defeat coming at the hands of Khabib Nurmagomedov at UFC on Fox 11 in April.


Considering the events of the past two days, it would have been understandable if Jordan Mein had been distracted in his co-main event showdown with Mike Pyle. Instead, “Young Gun” demonstrated laser-like focus in dispatching the veteran via technical knockout 72 seconds into their welterweight tilt.

“I feel great, and I wanted a knockout because I wanted to stay in this co-main and main event spot, because that’s where I belong,” Mein said.

On Friday, Mein’s father, Lee Mein was arrested on a charge of sexual battery. The UFC subsequently issued a statement banning the elder Mein, who usually corners his son, from the BOK Center on Saturday night. If such news affected the younger Mein, it didn’t show in the Octagon.

After avoiding a couple Pyle (26-10-1, 9-5 UFC) takedown tries, Mein (29-9, 3-1 UFC) faked a shot of his own and followed with a pair of devastating left hooks. The first connected primarily with the forearm, but the second offering was clean -- and it immediately sent the 38-year-old Syndicate MMA representative tumbling to the canvas. From there, Mein landed approximately five to six left hands before the bout was halted by referee Dan Miragliotta.

When I felt it land, it just felt so clean. Right on his chin,” said Mein, who has now finished 19 opponents inside of a round. “I was trying to aim for his throat, nice and low. When I saw him fall I could really see how hurt he was, and I could see how close the ref was -- that it was close to being over -- so I didn’t stop.”


The middleweight clash between Thales Leites and Francis Carmont began in predictably slow fashion. Leites changed things in a hurry 20 seconds into round two, scoring a surprising knockout of the massive Tristar Gym product.

“This is the new Thales,” said the former title challenger, who is now 4-0 in the UFC since returning to the promotion in August 2013. It was just the fourth victory via knockout or technical knockout of Leites’ pro career.

Neither fighter got much going in the opening frame, as Leites struggled to land takedowns from the clinch and Carmont (22-10, 6-3) offered little outside of a few hard low kicks. Round two brought a stunning contrast, as Leites (24-4, 9-3) backed Carmont up toward the cage and found the mark with a big overhand right. A right uppercut-left hook combination soon followed, sending Carmont down in a heap. Leites needed to fire off only a few follow-up punches before referee John McCarthy intervened.


Max Holloway emptied his figurative toolbox against gritty fill-in Clay Collard, doling out a diverse array of punishing attacks en route to a third-round stoppage. A brutal barrage of ground-and-pound brought an end to the 149-pound catch-weight bout at the 3:47 mark of the round.

Collard, who replaced the injured Mirsad Bektic on short notice, never stopped moving forward. Unfortunately for him, it was Holloway (10-3, 6-3 UFC) who had the advantage in technique, movement and conditioning. The 22-year-old Hawaiian landed a multi-faceted arsenal that included punching combinations, knees, and spinning-back kicks.

For a while, Collard (13-5, 0-1) appeared to be unfazed. As time progressed, however, the Pit Elevated Fight Team member became increasingly reliant on telegraphed takedown attempts. On the last of those, Holloway achieved back mount and flattened his man out. Collard’s attempts to escape only resulted in Holloway landing a series of nasty elbows from full mount. With nowhere to go, “Cassius” surrendered his back again, and Holloway mercifully put an end to the affair with one final ground-and-pound salvo.


In his first action in more than a year, James Vick got the better of Valmir Lazaro in a wild lightweight brawl. “The Ultimate Fighter 15” cast member landed frequently and more emphatically to capture a unanimous verdict (29-28, 30-27, 29-28) over his Nova Uniao-trained foe.

Both combatants engaged in a back-and-forth firefight in the first round. The action was sloppy at times, but Vick (6-0, 2-0 UFC) gradually began to assert himself over the course of the fight. He wobbled the Brazilian twice with right hands in the second stanza and continued to tag him in the final period. A head-kick knockdown punctuated the victory for the Team Lloyd Irvin representative.

“I felt very rusty. I was in the greatest shape of my life, and I felt so tired after the first round,” Vick said. “Honestly, I just felt like I didn’t have the gas tank to put him away. I saw his knees buckle three or four times when I hit him. I was trying so hard.”


Team Takedown’s Chas Skelly submitted Tom Niinimaki with a rear-naked choke 2:35 into the first round of their featherweight clash. It was the seventh career submission triumph for Skelly, who dropped a majority decision to Mirsad Bektic in his promotional debut.

Skelly (12-1, 1-1 UFC) landed a double-leg takedown early and quickly jumped on the Finnish fighter’s back as the two combatants stood. Upon freeing himself, Niinimaki (21-7, 1-2 UFC) pulled guard for a guillotine choke. That didn’t last long, as the Texan escaped and returned to his foe’s back. Shortly thereafter, Skelly was able to elicit the tapout.

“My first fight I didn’t press the action like I normally do,” Skelly said. “I’m the type of guy I’m going to be in your face the whole time, so if you sign to fight me, just know you’re signing up for a fight.”


Neil Magny earned his fourth UFC victory of 2014, notching a unanimous verdict against Alex Garcia in a largely uneventful welterweight affair. Judges Jason Greenwalt and Chris Lee saw it 30-27 for Magny, while Cardo Urso submitted a 29-28 tally in favor of the Grudge Training Center export.

Garcia (13-1, 2-1 UFC) lacked his usual explosive output, with a pair of slams -- one each in rounds two and three -- making up his most significant offense of the fight. The Tristar gym export appeared to tweak his knee early in the second stanza, perhaps limiting his options.

Magny (12-3, 5-2) was at his best in the opening period, as he forced “The Dominican Nightmare” to grapple and wrestle for the majority of the frame. Rounds two and three were not as definitive, but Garcia’s inability to mount offense when he did achieve positional control may have led to his demise -- especially with Magny able to remain busy with moderate strikes throughout. The defeat brought an end to Garcia’s six-fight winning streak.

Hobar (9-2, 1-1 UFC) landed multiple takedowns in each round, rarely allowing separation. When the two combatants did stand, the Texan responded by pressing Phillips (5-2, 0-2 UFC) against the fence, landing a hard standing elbow that cut his opponent above his left eye in the second. Phillips’ best moments came in round one, when he landed punches, elbows and upkicks from his back. However, Hobar’s relentless pressure gradually wore Phillips down and took the steam out of his attacks.


Beniel Dariush rallied to submit Tony Martin with an arm-triangle choke in the second round of a lightweight clash. The Kings MMA product landed a takedown before quickly transitioning to the choke to earn the tapout 3:38 into the period.

Martin (8-2, 0-2 UFC) set the tone early, attacking with punching combinations and hard leg kicks while bloodying his opponent in an energetic first round. The aggressive approach took its toll on the American Top Team member, however, and Dariush (8-1, 2-1 UFC) swung the momentum in his favor with some good work in close quarters on the tiring Martin in round two. Martin expended what was left of his gas tank on an errant takedown, allowing Dariush to capitalize for the finish moments later.


After a four-year absence, Ben Saunders made a successful return to the Octagon, submitting debutante Chris Heatherly inside of a round. “Killa B” locked in the rarely-utilized omaplata to secure the tapout 2:18 into the opening frame of the welterweight clash.

Heatherly (8-2, 0-1 UFC) wasted little time in getting the fight to the floor, landing a takedown within the first 20 seconds. He would eventually regret that decision. Saunders (17-6, 5-3 UFC) initially attempted to frame a triangle choke, landing elbows to the head of his adversary in the process. When Heatherly slipped out, Saunders transitioned to an omaplata on his foe’s left arm, gradually cranking the maneuver until Heatherly was forced to surrender.

“Basically the plan is to make people hopefully not want to stand with me,” Saunders said. “If you take me down I’m gonna me you dread there too. I’m gonna try to be dangerous all around.”


Wilson Reis utilized constant pressure, takedowns and back control to take a unanimous verdict over newcomer Joby Sanchez in the evening’s opening bout. All three cageside judges scored the bout 29-28 in favor of Reis, giving the Brazilian a victory in his flyweight debut.

Sanchez (6-1, 0-1 UFC), who took the fight on 19 days notice, had a chance to finish the bout in round two. He dropped Reis (18-5, 2-1 UFC) with a left hook early in the frame and floored him again with a head kick shortly thereafter. However, the Jackson-Wink MMA prospect was unable to capitalize, and Reis recovered to take control with a steady diet of takedowns in the final frame. While Sanchez fended off a number of rear-naked choke attempts, he was unable to mount any more offense down the stretch.