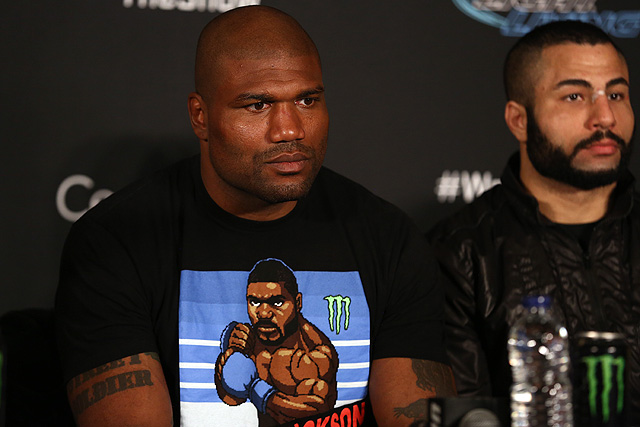 Quinton Jackson returned to the UFC with a win on Saturday night. | Photo: Dave Mandel/Sherdog.com

But, thanks to a ruling by judge in New Jersey’s appellate division on Tuesday that overturned Bellator MMA’s injunction against him, “Rampage” was suddenly back on the UFC 186 bill. His first fight since May 2014 turned out to be a successful venture, as Jackson outpointed Fabio Maldonado in a 215-pound catchweight co-main event at Bell Centre in Montreal.

“This was the most stressful time in my whole career. I’ve been fighting for 15 years and I’ve never had to deal with what I had to deal with just to get here,” Jackson said at Saturday’s post-fight press conference. “I hope I never have to deal with that again.“

It may not be quite that simple. While the injunction reversal allowed Jackson to compete at UFC 186, he still has plenty of unfinished business in court with Bellator. It remains unclear how that saga will play out over the coming weeks.

Jackson has had his share of issues with the Las Vegas-based promotion in the past, but he had only warm and fuzzy feelings for UFC brass following his triumphant return -- at least as warm and fuzzy as often disgruntled former champion can get.

“I’m not worried about what they [Bellator] do. I want to give Dana [White] and Lorenzo [Fertitta] big thanks. They had my back; they helped me out,” he said. “I’m gonna say it right now. I was over there. Bellator can’t fuck with the UFC. So I ain’t scared.”

Jackson was also in high spirits because Maldonado, as expected, engaged him in a standup-oriented affair. In a bout that featured only one takedown attempt between the two fighters, Jackson was able to land the majority of the significant blows. In the past, the Pride Fighting Championships veteran has made no effort to hide his disdain for being paired with wrestlers.

“To be honest I was just happy not to be fighting somebody that was desperate to take me down. When you’re fighting like a real man, like a real MMA fighter -- somebody who is going to fight and stand and bang with you, you don’t have to worry about people desperately trying to take you down,” he said. “You can let the kicks go, let the knees go. You can do things. I threw a flying knee but he was doing a great job. I wanted to go out there and show out.”

Jackson has lofty goals if he is able to continue his UFC career. After training “the hardest I’ve ever trained in my whole 15-year career,” he has his sights set on revenge tour that will eventually take him to the top of the division.

“Honestly I want to come back and beat everybody that beat me,” he said. “I want to fight ‘Shogun’ [Rua], Glover [Teixeira], Rashad [Evans] and make my way back up to Jon Jones. I’m on a mission. That’s the honest truth.”