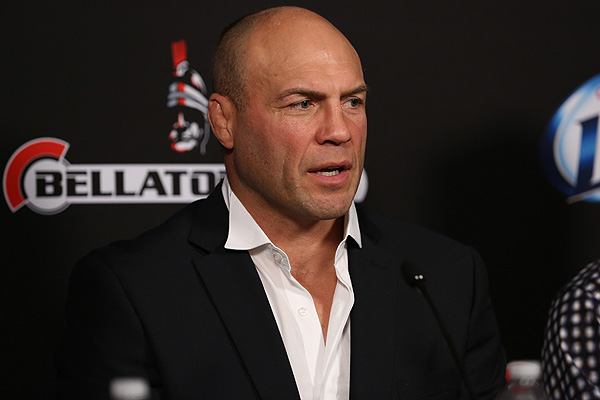 When Randy Couture decided to part ways with the UFC, he knew UFC President Dana White wouldn’t like it.

On whether he has been in contact with White: “I had some rather interesting and classic texts that came to my phone. This was kind of a couple weeks ago when things started leaking.”

On White saying he was happy not to be in business with Couture anymore: “I’m happy to not have to put up with and keep my mouth shut and deal with Dana as well. It goes both ways. I have a ton of respect for the [UFC]. In a lot of ways, I still have respect for Dana and the passion that he has for the sport and the things that him and Lorenzo [Fertitta] have managed to do for the sport over the course of their tenure since 2000, [but] certainly there’s plenty of things I don’t agree with.”

On Viacom owning Spike TV and a majority stake in Bellator and the role that plays in White’s anger toward Couture: “… At the end of the day, they’ve never shied away from competition and I think that’s what’s got them on their heels a little bit now and Dana especially, is that I think they see Viacom and this whole platform as a threat and serious competition to them being considered the only brand in the marketplace in this sport.”

On Bellator’s reality show: “I like the concept of the show. I like their emphasis on the training and on the athletes themselves. I think the progressive tournament does that in some ways because you get to pick your guys early and follow them and their success or failures all the way through. I think it’s focused on the right things. Obviously Spike carved out a niche by putting on TUF. When everybody else was pushing back and wasn’t willing to give the sport a chance on television, cable or otherwise, Spike stepped up and they created a niche for themselves in the programming. When the UFC skipped over to Fox, it left a void and I think this is Viacom’s attempt to fill that void and to continue to operate in that space.”

On coaching in general: “The coaches that I’ve had in my life have been in a lot of ways that standup male figure that I lacked. Having a father that was never around, those were the guys that I turned to. They guided me. They shaped and molded me in a lot of ways, so I have a ton of respect for that position and that title.”

On coaching alongside Frank Shamrock, Greg Jackson and Joe Warren on the show: “Certainly all the coaches have personalities. They have skill sets and styles, both teaching and fighting, that are going to be a big part of the interest in the show. It creates another layer for the fans to take a look at and compare and contrast between myself, Frank, Greg and Joe. How we do things, how we look at things, our perspective on fighting and what we teach -- all those things create interest … . I think it is a little bit different. Obviously it’s still mixed martial arts at the end of the day. If you’re a fan of the sport, I think you’re going to like this show.”

On the opportunity he was given: “I think this opportunity to go back to Spike, to lend credence and authenticity to a new brand and give fighters another outlet that’s separate and strong and has a great platform in Spike, is another important thing that needs to happen in this sport right now.”