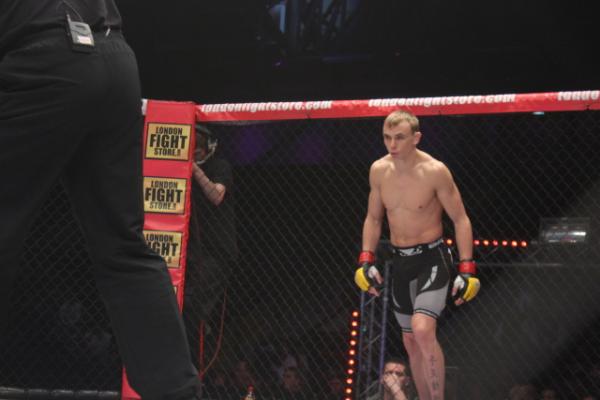 
When Steven Ray last squared off with Curt Warburton in June, he needed the full five rounds to eke out a split-decision triumph. His victory on Saturday was much more decisive.

Ray retained his lightweight title with a second-round submission of Warburton in the Cage Warriors Fighting Championship 73 headliner at Metro Radio Arena in Newcastle, England. Ray tapped his rival with a rear-naked choke 2:00 into round two, giving him the nod in his trilogy with Warburton and capping off a double main card for the Europe-based promotion. Warburton took a three-round verdict over Ray in their first meeting at BAMMA 12 in March 2013. The third bout between the two lightweights began in competitive fashion, as they spent much of the first round jockeying for an advantage in the clinch and from the 50-50 guard. Ray seized momentum in the second period when he sent Warburton tumbling to the canvas with a straight left. With Ray in full finishing mode, Warburton scrambled for a kneebar in an attempt to buy himself some time to recover. Ray would not be denied, however, as he moved to mount and postured up to land more powerful ground-and-pound. Eventually Warburton surrendered his back, allowing Ray to secure the fight-ending choke. Earlier, Jim Wallhead made short work of Juan Manuel Suarez in their welterweight scrap, knocking out the Spaniard with a right hook and follow-up ground-and-pound 1:49 into the opening stanza. It was the ninth KO/TKO victory for “Judo” Jim, who rebounded from a first-round knockout loss to Danny Roberts at CWFC 68 in August.

After a brief-feeling out period, Wallhead showcased his power and finishing instincts. After dropping Suarez with the right hook, the Team Rough House product swarmed his fallen foe with a barrage of unanswered punches on the mat, forcing referee Marc Goddard to call a halt to the contest.

Shaj Haque won for the sixth time in seven professional outings, taking a unanimous verdict (30-27, 30-27, 30-27) over Damien Rooney in a flyweight matchup. All six of Haque’s career triumphs have gone the distance.

Superior speed, movement and conditioning were the difference for Haque, as Rooney appeared to fade as the bout progressed. While both men struggled to hit their marks early, Haque settled in and began to land his jab with regularity. “Superman” increased his output in round three, peppering his taller foe with several solid combinations to seal the win.

Lewis Long submitted Matt Inman with a rear-naked choke for his second victory in four Cage Warriors appearances. The welterweight tussle ended 4:16 into the opening frame.

Long was aggressive from the outset, throwing his punches with ill intent while forcing the action. The Trojan Free Fighters product really got rolling after taking Inman to the mat. From there, Long relentlessly attacked with purposeful ground-and-pound. The assault eventually created an opening for Long to take Inman’s back. He then secured a body triangle, softened his foe with more punches and slid his arm under Inman’s chin to elicit the tapout.

Brett Caswell handed Marcin Lasota the first loss of his professional career in a flyweight tussle. All three judges scored the bout 29-28 in favor of Caswell, who relied heavily on his judo base to thwart his foe’s wrestling.

While Lasota remained diligent with his takedowns, he was not able to consistently establish dominant positions over the course of the first 10 minutes. Caswell, in addition to quickly returning to his feet when taken down, authored several beautiful throws to put his stamp on the first two periods. Lasota mounted his most serious offense in round three, as he threatened Caswelll with multiple leg lock attempts. While Caswell appeared to be in peril on a couple occasions, the judoka was able to emerge from the predicament unscathed.

Paddy Pimblett survived an inauspicious start to garner a technical knockout via doctor stoppage against Stephen Martin in a featherweight showdown. A vicious elbow from the 19-year-old Liverpool native at the end of the first round instantly opened a huge cut above Martin’s right eye. A cageside physician examined Martin and called off the fight prior to the second round.

Martin struck first, flooring his opponent with a clean left hook during the bout’s first exchange. Pimblett quickly regained his bearings and scrambled desperately out of danger. Unable to capitalize on the initial opportunity, Martin paid the price in the frame’s waning moments.

Elsewhere, Alex Enlund raced out to an early lead on the scorecards and then held off a furious rally down the stretch from Nad Narimani to capture the promotion’s vacant featherweight strap in the first main event bout of Saturday’s doubleheader. All three cageside judges scored it 48-47 for Enlund, who earned his fourth straight victory under the CWFC banner.

Unlike his previous three triumphs, all of which ended inside of a round, Enlund had to enter deep waters to earn championship gold. Enlund did a good job blending punches and kicks in a close first frame, but rounds two and three featured his most definitive work. Enlund took Narimani’s back in both stanzas and appeared to be on the verge of earning a stoppage late in round three. However, Narimani survived his opponent’s barrage of punches and elbows to see the championship frames.

There, Narimani staged a comeback, connecting with his most effective strikes of the bout on a clearly fatigued Enlund while stifling all of his adversary’s attempts to get the fight to the floor. The late salvo would not be enough, as Enlund held on to capture the strap once held by current UFC star Conor McGregor.

Earlier, well-traveled veteran Ronnie Mann took a unanimous decision victory over Moktar Benkaci in a bantamweight bout. All three judges submitted 30-27 scorecards in favor of the Bellator and Sengoku veteran.

Although Mann and Benkaci had a combined 18 submission victories between them, both men were content to trade shots on the feet. While the majority of the fight was contested at a moderate pace, Mann swayed the judges by making his living in the center of the cage and landing with superior volume. Benkaci, who spent much of the contest circling on the outside, offered only sporadic bursts of aggression. However, Mann was usually able to counter his opponent effectively with punching combinations.

Leeroy Barnes elected to engage Kyle Redfearn on the feet and paid for it, as Redfearn earned a technical knockout victory. A barrage of left and right hands brought an end to the middleweight contest at the 2:12 mark of the initial stanza.

Redfearn set the tone by stunning Barnes with a hard straight right early, and it went downhill from there for the MMA Academy Liverpool representative. Redfearn’s punches continued to find their way through Barnes’ guard, and the boxer appeared to have his opponent reeling for a stoppage against the cage. Referee Marc Goddard gave Barnes some leeway to recover but ordered a standup when Barnes was unable to lure his opponent to the mat and into his guard. Shortly thereafter, Redfearn mercifully put an end to the proceedings with one final salvo.

A physical Liam James wore down Dean Trueman to capture a unanimous verdict in a 145-pound affair. All three cageside judges scored the contest 30-27 in favor of the man known as “Bad Intentions.”

After a back-and-forth opening frame, James imposed his will in the second and third frames, bullying his foe with clinches and takedowns. While Trueman stayed in the fight with active and resourceful guard work, James’ approach took its toll, as he punctuated his victory by taking his foe’s back in the waning moments of round three and pounding away with punches as time ran out.

Lewis Monarch earned his fourth first-round finish in as many professional appearances, as he submitted Ellis Hampson with a triangle choke 4:12 into the opening round a 155-pound clash.

The two lightweights traded liberally in the pocket early, and Monarch gradually gain an advantage as he connected with better combinations and bullied his foe with knees in the clinch. When Monarch began to up the intensity of his assault, Hampson sought refuge by taking his man down. However, he quickly found himself ensnared in his opponent’s guard and was forced to tap out.

Ian Malone relied on a methodical top game to edge Mark Connor in a competitive flyweight tilt. Despite offering little on the feet, the Newcastle, England, native emerged with a split decision triumph (29-28, 28-29, 29-28) at the end of the three-round affair.

Takedowns and positional control in rounds two and three likely clinched the victory for Malone. Connor returned to his feet in the bout’s final minute but struggled to track down his fading opponent as time expired.

In preliminary action, Danny Suter put Michael Abbott away with a methodical barrage of ground-and-pound in a featherweight bout; referee Rich Mitchell brought a halt to the contest 3:09 into round two. Meanwhile, Irene Cabello submitted Vanessa Reinsch with a rear-naked choke 53 seconds into round two.

Four amateur bouts kicked off the evneing: George Hardwick submitted Gary Worsfold with an arm-triangle choke 2:26 into round two; Craig Clarkson got the win over Wayne Rigg when Rigg was disqualified for landing a knee to the head of his grounded opponent 34 seconds into the opening frame; James Ryder took a unanimous decision over Chris Mcclarence; and Davie Mcloughin outpointed Josh Abraham.