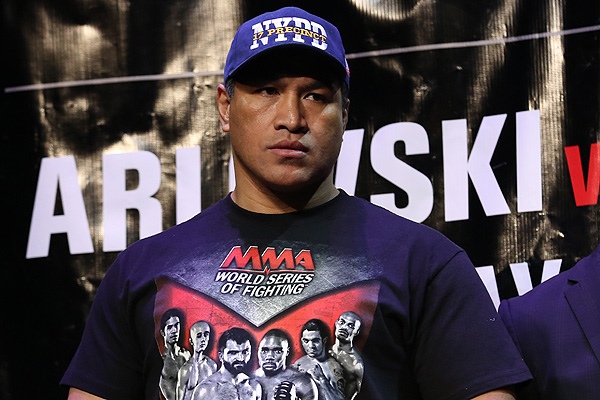 
World Series of Fighting President President Ray Sefo wasn’t sure he wanted to bring Rousimar Palhares into his promotion.

The Brazilian has a reputation for holding submissions after his opponents have tapped, and he also tested positive for elevated testosterone after his December 2012 bout against Hector Lombard.

On signing Palhares: “When it was first brought to my attention, I already had seen Dana White’s interview. I had seen the reasons why he was cut. Then I did a little bit more research and found out that he had been suspended once or twice prior to this. So right away, it was a red flag for me to say no, but after talking to the team and then [matchmaker Ali Abdel-Aziz] had been going back and forth with Rousimar’s camp and then Nogueira, Antonio Nogueira, became one of his coaches/mentor and gave us his word that he was going to be fully responsible but also at the same time he was going to be working with him a lot, mentally, physically and about his game as well. And then obviously the interview that Renzo Gracie did. … So I had to really kind of sit back and look at the whole picture.”

On what swayed him: “When you really look at it, the guy hasn’t permanently hurt anybody, although he’s been considered a dirty fighter. He hasn’t permanently injured or damaged anybody. And then I did a little bit more research. I talked to some people that know him really well. He’s a really down-to-earth guy, simple guy, family man. This is a guy that lived under a bridge at one point in his life. There’s a lot of things. Now that he has a family and what have you -- listen, I truly understand. Listen, Nevada is known as the second chance state, and for us, we’re in America, the land of the free, and we’ve got to give people opportunity. The opportunity, I weighed up everything, the pros and cons, and Ali finally convinced me. So we said yeah, absolutely.”

On whether Palhares has a short leash: “Absolutely. I’ve actually made that clear to him and his team. I’ve been very loud about it as well. I’m not going to tolerate any of that nonsense.”

On what might have led to Palhares’ prior incidents: “I truly believe that the guy’s a nice guy and everything, but then again, I just recently found out some information. When I say that, I mean three weeks ago. His coach, that’s the way he was coached. You go back in the history of the UFC, I believe Royce [Gracie] when he fought Ken Shamrock, submitted Ken, Ken tapped, and then when the referee [intervened], Ken said he didn’t tap. … And then Rousimar’s coach … the same thing happened with him. So he’s been coached to be this guy that when it goes to that kind of submission, he’s going to hold on tight until the referee’s there. Again, that being said, I won’t tolerate any -- obviously, if I clearly see the referee’s going, ‘Stop, stop, stop, stop,’ and he doesn’t, then that’s definitely not going to be tolerated.”