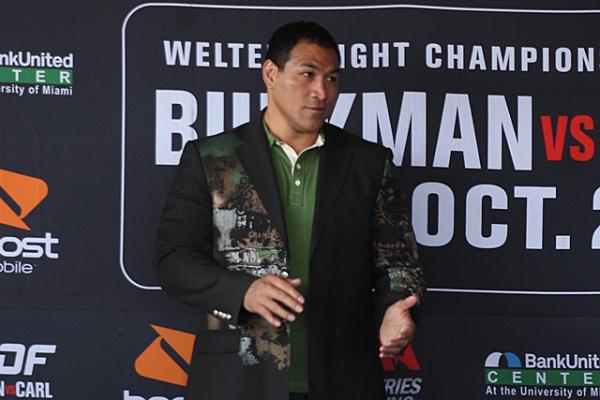 World Series of Fighting is waiting to hear back from Bellator after challenging the company to a co-promotional event earlier this week.

“We wanted to make something exciting for the fans as well as the world of MMA, so we issued the challenge,” WSOF President Ray Sefo told the Sherdog Radio Network’s “Beatdown” show. “We’ll just wait and see if it happens or not.”

WSOF proposed a 10-fight card matching its fighters against Bellator representatives. The lineup would be headlined by a bout between WSOF’s Tyrone Spong and Bellator’s Quinton Jackson.

“I haven’t actually heard what was said, but apparently there was words going back and forth between [WSOF matchmaker Ali Aziz] and [Bellator President Bjorn Rebney],” Sefo said. “I think that’s where all this came from and then Ali talked to me about it. I thought, ‘Hey, listen. It’s a great idea. Let’s make it happen.’ So when he went on the MMA Hour and announced it, we were well prepared for it. Now it’s a waiting game, whether it’s going to happen or not.”

At this point, Sefo isn’t sure Bellator will respond.

“In this situation, it’s not just the one fight or one fighter,” he said. “Ali put a card out there and matched up certain people, and if they come through with it, great. If not, listen, I think either way, it’s going to be great for the sport and I’m sure something the fans are very excited about because everybody’s blowing me up on Facebook, on Twitter. Social media is just going crazy since this announcement was made. I think it’s only going to benefit the sport in the long run.”

If somehow the card did come together, Sefo likes his fighters’ chances.

“I think we would do very well,” he said. “Ali’s a great matchmaker. He’s proven that time and time again, and when I looked at the list, I was like, ‘OK, great.’”