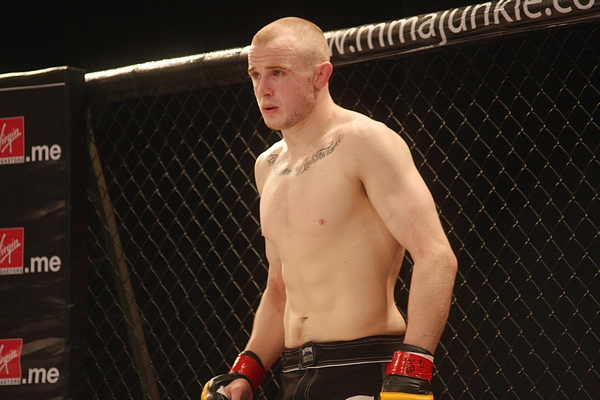 
When the charismatic Conor McGregor parted ways with the Cage Warriors Fighting Championship for the bright lights of the UFC, he left some big shoes to fill.

While only time will tell if Steven Ray is capable of becoming the face of the European promotion, he proved himself more than deserving of the 155-pound strap that formerly belonged to the Irishman.

With victories over Jason Ball (20-13) and Sean Carter (7-1), Ray (14-4) captured the organization’s vacant lightweight crown at CWFC 60 at the Forum in Kentish Town, North London on Saturday. The Scottish fighter took a unanimous verdict over Ball in a semifinal bout before submitting Carter with a rear-naked choke 4:40 into the opening round of the evening’s headliner.

Ray was supposed to face Ivan Buchinger, who defeated Mick Sinclair in the other 155-pound semifinal, but Buchinger suffered a rib injury and was unable to proceed. Instead, Ray was left to dispatch Carter, who submitted Richard Griffin via second-round rear-naked choke in an alternate bout earlier on the card.

The bout itself was never really in doubt. Ray secured a takedown approximately one minute in and maintained control for the duration. He moved to full mount a minute later and was able to take his opponent’s back after finding a home for some heavy rights and lefts. With a body triangle in place, Ray gradually slid his arm under Carter’s neck, forcing the tapout with 20 seconds left in the opening round.

To hear “Braveheart” tell it, the change in opponent was of little importance.

“It didn’t matter who [it was going to be]. I was preparing for this moment for nine weeks,” Ray said. “I’ve made the sacrifices to go and train at Tristar away from my family for six weeks. I missed my daughter’s first birthday. I’m not going to be doing all that stuff if I’m not coming here to kill myself to get this belt.”

Bola Omoyele began the co-headliner in impressive fashion, but it would be Aaron Wilkinson who ultimately had the last laugh. Taking advantage of a visibly fatigued Omoyele, the “Ultimate Fighter 12” alum unloaded with a barrage of ground-and-pound to earn a stoppage 1:08 into the second round of their welterweight encounter.

Early on, such a conclusion appeared unlikely, as Omoyele (7-2) controlled positioning on the mat and countered the forward movement of Wilkinson (11-6) with heavy power shots. However, Wilkinson appeared to catch his foe with an overhand right and ended the stanza on top after a late takedown.

After the first round expired, Omoyele was slow to get to his feet. Eventually he made his way to the corner, but a brief delay ensued at the beginning of round two, as referee Marc Goddard asked Omoyele if he could continue. Despite a moment of hesitation, the bout went on, but it was academic from there. “Cash Flow” offered virtually no resistance as Wilkinson hammered away with punches until the stoppage.

Earlier, Kacper Karski displayed his mastery of the front-headlock series in a triumph over Leeroy Barnes at middleweight. The Pole landed a couple solid knees to the body before locking in a modified guillotine. Although the thickly muscled Barnes (12-12, 1 NC) was able to resist the choke, Karski (5-1) dropped a couple elbows from side control before transitioning to a tight brabo choke. With no avenue for escape, Barnes asked out of the conflict 1:35 into round one.

Bryan Creighton (5-1) earned a somewhat surprising victory in his second Cage Warriors appearance, submitting Brazilian jiu-jitsu black belt Spencer Hewitt with a mounted guillotine 2:48 into round one. When Hewitt attempted a single-leg takedown, the Sapphire MMA representative quickly jumped on an arm-in guillotine and rolled into mount, forcing Hewitt (10-6) to ask out of the flyweight contest. Hewitt, who entered with nine submission victories to his credit, has lost four of his last five outings.

Amanda Kelly enjoyed a dominant professional debut, as she knocked out Hannah Stephens at the 3:40 mark of the opening period in a women’s bantamweight scrap. The fight was never in doubt thanks to the KO Muay Thai Gym representative’s rugged work in the clinch. Short, standing elbows and knees to the body consistently found their mark against the Englishwoman. Eventually, Stephens (2-2) could take no more, as a series of unanswered knees dropped her and forced referee Rich Mitchell to halt the bout.

To begin the main card, 19-year-old Arnold Allen remained unbeaten with a submission triumph over Declan Williams (8-7-3). After imposing his will through top control and periodic bursts of ground-and-pound, the BKK Fighters prospect secured a tapout with an arm-triangle choke 4:50 into round two.

In preliminary action: Nad Narimani (6-1) submitted Athinodoros Michailidis (4-1) with a rear-naked choke 3:42 into the opening stanza at featherweight; Aaron Blackwell (12-9-1) took a split decision over Kris Edwards (8-7); Charlie Watts (4-1) captured a split verdict against Ben Constantine (4-5) and Cameron Else (1-1) tapped out Patrick Pimblett (4-1) with an anaconda choke in 35 seconds.