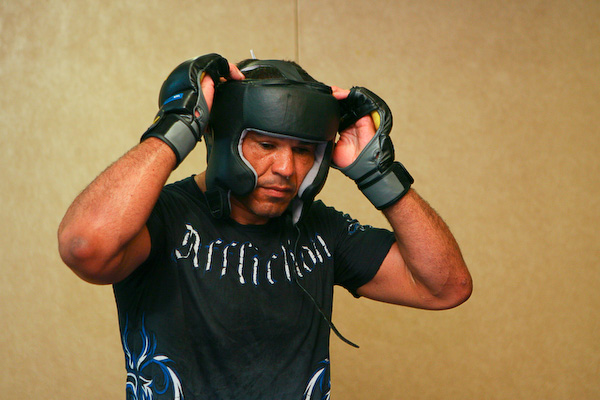 What was supposed to be a light workout and press conference Monday became the Brazilian heavyweight’s official return to training following mid-December surgery to repair a broken right arm. “Minotauro” wasn’t expected to resume workouts until June, but this afternoon at the Team Nogueira training center, he put on gloves and training gear to spar with teammate Diego Braga.

“I felt great. I was longing to train. I was just going to show some ‘shadow’ training, but I couldn’t stand it,” said Nogueira, admitting that he isn’t yet ready to train at 100 percent. “I still need about three weeks of physical therapy [and] to hone my boxing with coach Erivan [Conceicao], and then, later, I’ll call Master [Ricardo] de la Riva and start training jiu-jitsu. I think I’m back in a month.”

The 35-year-old had his arm snapped in December by a Frank Mir kimura in a brutal submission loss at UFC 140. Before Nogueira (Pictured, file photo) can think about a Mir rematch, or any other fight, he has some appointments lined up with his sparring partners at Team Nogueira.

“Junior ‘Cigano’ [dos Santos] is coming here pretty soon, to train for the fight against [Alistair] Overeem,” Nogueira said. “Then, at some point, come [Antonio] ‘Bigfoot’ Silva and Anderson Silva. I need to be 100 percent for training with these guys, because they’re tough guys.”