Mirko Cro Cop got a raw deal against Remy Bonjasky at Glory 14 in his native Croatia. | Dave Mandel/Sherdog.com

The bout was billed as a formal retirement bout for the 38-year-old Bonjasky, who had unofficially retired after the 2009 K-1 World Grand Prix; he returned to the ring in October 2012. “Cro Cop,” who has entertained multiple short-lived retirements, was the much more assertive and effective fighter for the balance of three rounds. “The Flying Gentleman” tried to circle around the perimeter and find some of his trademark kicking offense but was easily defended and countered. Filipovic repeatedly caught Bonjasky’s body kicks, sometimes responding with punches and sometimes throwing him as if it were a muay Thai bout.

“Cro Cop” tried with both his right and left legs to set up his patented head kick, but the rangy and defensively savvy Bonjasky blocked most of the attempts. The bout was a sloppy and chippy affair and did not feature much clean scoring offense, but that which did exist came from the Croatian. Upon the unveiling of the decision, an obviously irritated “Cro Cop” left the ring while the Arena Zagreb crowd voiced its displeasure. Photo: D. Mandel/Sherdog.com
Kiria was understandably emotional after his
incredible come-from-behind KO win.
Ristie rocketed to prominence in November with his knockout wins over Giorgio Petrosyan and Robin van Roosmalen to claim the Glory crown in New York City, and for three rounds, his wins over those divisional standouts appeared to be no fluke. The Surinamese-born fighter dominated Kiria with left hooks and stepping knees to the head and body, sending him to the canvas in the second round with a particularly stern knee to the face. Though the champion appeared to slow in the fourth round, the battered Kiria, with his right eye swollen shut, did not look like he would be able to right the ship.


In the fifth round, Ristie continued to attack and sought to close the show rather than trying to sit on his lead. A desperate Kiria threw two powerful right hooks that clobbered Ristie, sending him reeling to the mat. Upon regaining his feet, Ristie tried to return fire, but the ashihara karate specialist let loose with both hands and continued blasting away until Ristie hit the mat once more.

With 30 seconds to fight, Kiria was a man possessed, throwing with everything he had until Ristie collapsed into the ropes and referee Al Wichgers rescued him at 2:22 of the fifth and final round. Photo: D. Mandel/Sherdog.com
Pereira's early knockdown was key in his
tournament final against Parparyan.
Pereira reached the final quickly, needing only 122 seconds to lay waste to MMA fighter-turned-kickboxer Jacoby in their semifinal. The Brazilian was all over the Jacoby from the bell with left hooks and sharp kicks, eventually landing a counter left hook that obliterated him in the corner. Parparyan’s path was more arduous, as he wore down the nimble, kick-oriented Justin Wilnis with rugged volume punching over three rounds to win a split decision: 29-28, 29-28 and 28-29.

The difference in their semifinal bouts was evident, as an energetic Pereira jumped all over “Hak” with heavy punches and wild kicks.

While Parparyan was still trying to compose himself in the first frame, Pereira ripped him with a clean right cross that put him on the canvas. Parparyan had more success as the fight wore on, but the fresher Pereira kept his work rate up and, aided by the knockdown, took the majority verdict.

With the victory, the 26-year-old Sao Paulo native earns a berth in the Glory world middleweight championship tournament slated for later this year.


The brightest star of the Glory 14 undercard was Benjamin Adegbuyi, as the robust Romanian heavyweight burned through Ukraine’s Dmytro Bezus. The 29-year-old Adegbuyi, who sparred with UFC light heavyweight Alexander Gustafsson in preparation for their respective March 8 fights, put Bezus on the canvas three times in the second frame, officially earning the stoppage at 1:53.

Lightweight standout Murthel Groenhart had to get off of the canvas to halt late replacement Teo Mikelic, who stepped in on short notice for the injured Shemsi Beqiri. The Mike’s Gym product was dropped by a crisp right cross early in the first frame, but “The Predator” got up and went to work, opening a cut on Mikelic that prompted a doctor’s stoppage after the first three minutes. 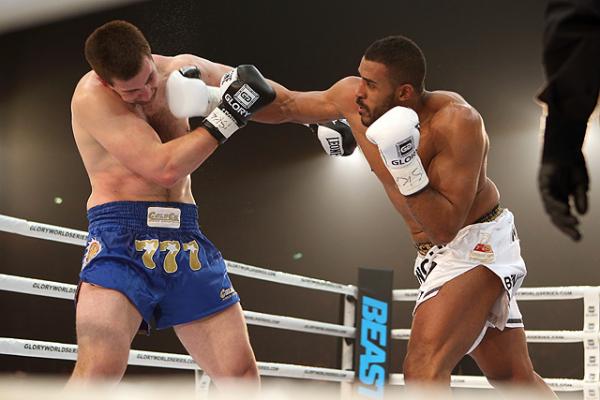 In his Glory debut, Croatian heavyweight Mladen Brestovac paid fitting tribute to the event’s headliner, knocking out Dutchman Jahfarr Wilnis with a left roundhouse kick to the head, a la “Cro Cop,” in the first round. Another homeland heavyweight, Igor Jurkovic, notched a first-round stoppage of his own. In his light heavyweight debut, Jurkovic knocked down Holland’s Michael Duut quickly and followed up after the count with a fight-ending swarm of punches.