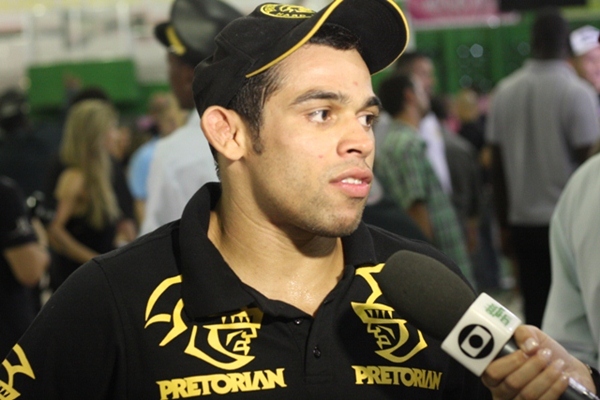 White revealed the booking during the most recent episode of “The Ultimate Fighter” Season 15. Faber was initially expected to face fellow ‘TUF’ coach and reigning bantamweight king Dominick Cruz at the July 7 event, but Cruz recently tore his ACL while training for the bout. The UFC boss confirmed the injury during last week’s episode of the reality series but stated he had not yet secured a replacement opponent to face Faber for the interim title.

Barao was originally slated to face veteran Ivan Menjivar at UFC 148 before being tapped to replace Cruz. It is currently unknown if “The Pride of El Salvador” will still compete at the event, which takes place at the MGM Grand Garden Arena in Las Vegas and is headlined by a middleweight title rematch between Anderson Silva and Chael Sonnen.

Faber, 33, has won three of his last four contests. The former World Extreme Cagefighting featherweight king made his Octagon debut 14 months ago at UFC 128, taking a unanimous decision from another ex- WEC champ in Eddie Wineland. “The California Kid” then challenged Cruz for his UFC bantamweight strap on July 2 in a rematch of their 2007 featherweight confrontation. “The Dominator” evened the score in the return bout, taking a unanimous nod from Faber at UFC 132.

Most recently, the Team Alpha Male founder rebounded with a second-round stoppage of Brian Bowles, another onetime WEC titlist. Faber forced Bowles to submit to his vaunted guillotine choke in the second round of their Nov. 19 contest at UFC 139.

Meanwhile, Barao enters the bout riding one of the sport’s longest winning streaks. After falling via unanimous decision in his 2005 pro debut, the 25-year-old has not tasted defeat. The Nova Uniao representative has won 28 of his last 29 bouts, with only a 2007 no-contest with Claudemir Souza marring that otherwise perfect stretch. Barao has posted three wins in the Octagon thus far, besting Cole Escovedo and Brad Pickett before outpointing Scott Jorgensen on Feb. 4 at UFC 143.