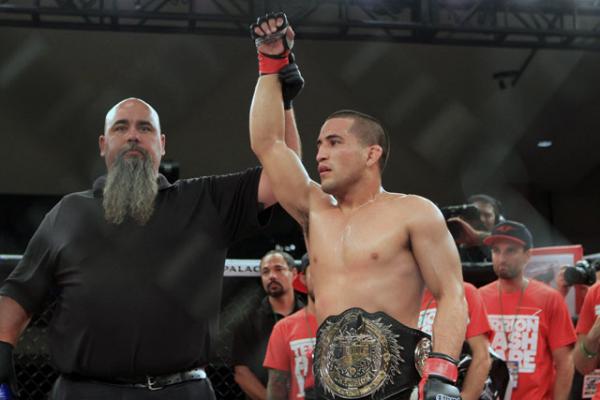 
UFC 177 already featured one of the most maligned pay-per-view lineups in promotion history. That was before Renan Barao dropped out of his bantamweight title rematch against T.J. Dillashaw on Friday afternoon.

According to a report from the Brazilian outlet Combate, Barao passed out while cutting weight on Friday and was taken to a Sacramento hospital. Not surprisingly, the Brazilian did not show up for licensing or medicals with the California State Athletic Commission. A source close to the bout told Sherdog.com that Joe Soto will now get the 135-pound title shot against Dillashaw.

A little more than three weeks ago, Soto competed at Tachi Palace Fights 20, where he submitted Terrion Ware with a north-south choke in the third round. After the bout, the Californian lobbied for a shot in the Octagon.

His wish was granted less than a week later, as he was paired with Anthony Birchak in a preliminary bout at UFC 177. With Soto’s plans changing, Birchak will not compete on Saturday night. A five-time Bellator veteran, Soto enters his matchup with Dillashaw on a six-fight winning streak.

Dillashaw upset Barao at UFC 173 to capture the bantamweight strap. The Team Alpha Male standout is 6-2 in the Octagon, with his only losses coming at the hands of Raphael Assuncao and John Dodson.
SHARE ON FACEBOOK SHARE ON TWITTER
Related Articles
Latest News
+ VIEW MORE