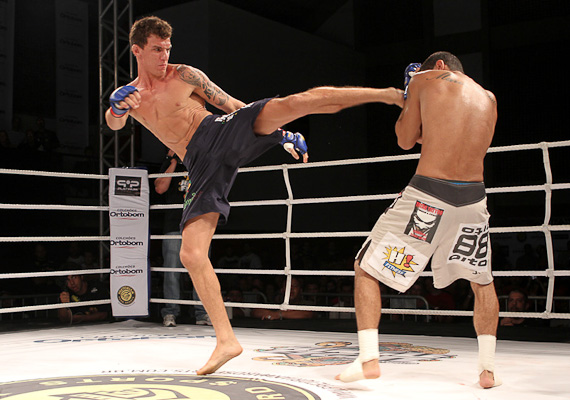 
It may not have been the belt he wanted, but Renato Carneiro nonetheless collected a Jungle Fight title on Saturday night.

The undefeated Constrictor Team fighter was scheduled to rematch featherweight champion Alexandre “Capitao” de Almeida until Almeida withdrew from the bout two weeks out due to an arm injury. Instead, Carneiro took on fellow Brasilia native Ismael Bonfim for the Jungle Fight interim featherweight strap in the main event of Jungle Fight 71 at Caninde Stadium in Sao Paulo.

Bonfim offered little resistance for “Moicano,” who hit a trip takedown midway through the opening round and never looked back. Carneiro took full mount and began unloading with punches until Bonfim gave up his back. As Bonfim struggled to his feet, Carneiro remained locked in back mount and applied a deep, one-armed rear-naked choke to force a standing tap at the 2:59 mark. The victory moves Carneiro’s record to 8-0-1, with all four of his finishes coming by way of submission.

In the first title bout of the evening, heavy handed Elizeu Zaleski dos Santos knocked out Itamar Rosa to capture the vacant Jungle Fight welterweight belt. An overhand right to the ear was the beginning of the end for Rosa, who staggered backward toward the fence on rubber legs as “Elizeu Capoeira” bombed him with more punches. When a left hook on the temple sent Rosa to the ground in a heap, referee Douglas Aires stepped in, awarding dos Santos the championship at 1:59 of the first round.

X-Gym product Fabiano “Soldado” Nogueira smashed his way to a first-round stoppage which halted the five-fight winning streak of Bruno “Beirute” Tavares. Nogueira spent the first half of round one carefully defending against an armbar, but once the Rio de Janeiro-based featherweight was clear of danger, he poured on the punishment. With Tavares trying for ineffectual heel hooks from guard, Nogueira stood and pounded his opponent’s unprotected face with heavy right hands, forcing referee Flavio Almendra to intervene at the 4:25 mark.

Mexico’s Jose Diaz gave no chance to late replacement Guilherme Henrique in their welterweight affair. “Suavecito” scored an early takedown and fended off a Henrique armbar attempt before posturing up and knocking the Brazilian unconscious with a series of unanswered punches at 4:35 of the opening round.

Chilean featherweight Gaston Manzur survived an early knockdown and overcame an eight-inch height disadvantage to submit Mexican foe Ismael Vasquez. After being floored with a right cross in the opening seconds of the bout, Manzur recovered, swept and used a heavy top game to negate his 6-foot-1 opponent’s reach. The end came at 1:56 of round two when Manzur secured a kneebar to elicit the tap.

At lightweight, Ciro “Bad Boy” Rodrigues used repeated takedowns to grind out a unanimous decision (30-28, 30-27, 30-27) in an unremarkable three-rounder with Lucio “Curado” Abreu.

In undercard action, bantamweight David “Tata” da Silva earned a unanimous decision (30-27, 30-27, 30-27) against Diego Duarte, welterweight Marcus Vinicius Cruz used a knee in the clinch and follow-up punches to stop Rene Pessoa at 2:08 of round two, and lightweight Erick Barbosa finished Joao Piccirillo with punches at 1:45.