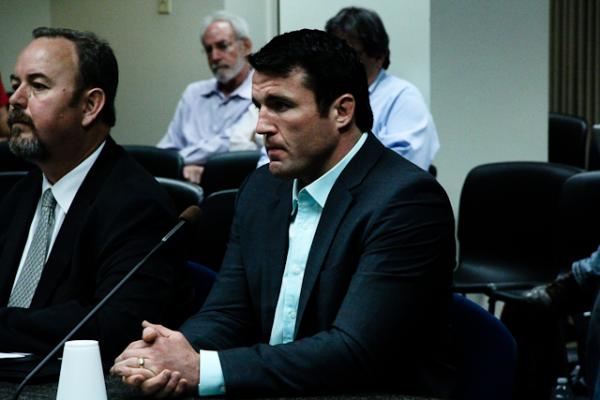 It appears that Chael Sonnen will go through with plans to compete at Metamoris 4. | Mike Sloan/Sherdog.com


The threat of a hefty fine from the Nevada Athletic Commission will apparently not be enough to prevent Chael Sonnen from competing in the Metamoris 4 headliner on Saturday.

Sonnen is scheduled to face Andre Galvao in a grappling match at Petersen Automotive Museum in Los Angeles.

After failing two drug tests, Sonnen was suspended from MMA competition for two years by the NAC on July 23. In addition, the Oregon native was required to cover all fees associated with the failed tests on May 24 and June 5 as well as work with the commission to educate other fighters on the risk of using performance enhancing drugs.

The NAC has determined that Sonnen’s participation in the grappling event violates that suspension and has threatened to fine Sonnen $250,000 per drug violation if he elects to compete at Metamoris. According to Bleacher Report, Sonnen’s attorney, Ross Goodman, has sent multiple letters to the commission seeking clarification on the matter.

NAC Chairman Francisco Aguilar originally sent Sonnen a letter on July 30 claiming that his decision to compete at Metamoris was a “breach of the commission’s order.”

Meanwhile, in a video interview with Brazilian outlet Combate on July 23, Aguilar says that Sonnen’s participation in Metamoris is not covered by the suspension. The NAC has not responded to Goodman’s inquiries, and as a result, Sonnen is traveling to Los Angeles today, according to Bleacher Report.


When a Gangster says he will make that walk, he MAKES THE WALK.

Sherdog.com reported earlier this week that Sonnen had reached out to Randy Couture to take his place, “The Natural” was unable to do so due to prior obligations centering around the premiere of “The Expendables 3.”

Metamoris has not made a formal announcement regarding its main event, and the organization’s website continues to advertise Sonnen-Galvao as its featured match.