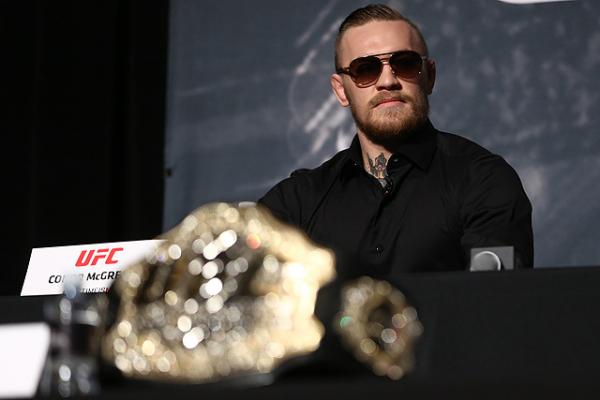 A title bout in Conor McGregor’s home country could be on the horizon. | Dave Mandel/Sherdog.com


A city curfew could prevent a potential featherweight title fight between Conor McGregor and Jose Aldo from taking place at a soccer stadium in Ireland later this year.

McGregor is scheduled to face Dennis Siver on Sunday at UFC Fight Night in Boston. A win there would likely make “Notorious” the division’s No. 1 contender.

The UFC has targeted 82,000 seat Croke Park in Dublin -- along with Las Vegas -- as a potential spot for the featherweight title matchup, but according to a report from The Score.ie, Croke Park stadium director Peter McKenna has said that a city-imposed curfew could derail such plans.

McKenna added that the UFC has asked specifically about reserving the venue for a date in May, but said that since the event would be forced to end by 11 p.m. local time, it could pose a threat to the fight taking place in McGregor’s country.

Dave Allen, the UFC’s Director of Brand, Communications and Events told The Score that tweaking the start time for a card of that magnitude isn’t too far out of the question.

“If there are curfews, that’s okay, not all events have to hit U.S. timelines. The way we think is, how can we get the most people to watch our events? We have fans all around the world consuming the product. But we haven’t looked at any of that at this moment,” Allen said. “I don’t think curfews, licenses or any of that are stopping us from going anywhere. We come up against that process everywhere we go, and that’s the process we will go through again if Conor wins this weekend and we decide we’re going to go that way.

“Once we get to that stage, then we have to get into a planning process. Then we have to start working out where is the best place to hold that event,” Allen continued. “There are a number of different things that have to be looked at before we can say we’re going to Croke Park, the Aviva Stadium, Las Vegas… a lot of work has to be done beforehand, so I would not be counting the chickens before this egg has hatched.”

UFC Fight Night “McGregor vs. Brandao” was such a success that immediately following the event, many felt as though “Notorious” headlining a card in a bigger arena was a formality at some point down the line.

But first, McGregor must make his way through Siver this Sunday, a test that even UFC President Dana White says is one that should not be taken lightly.