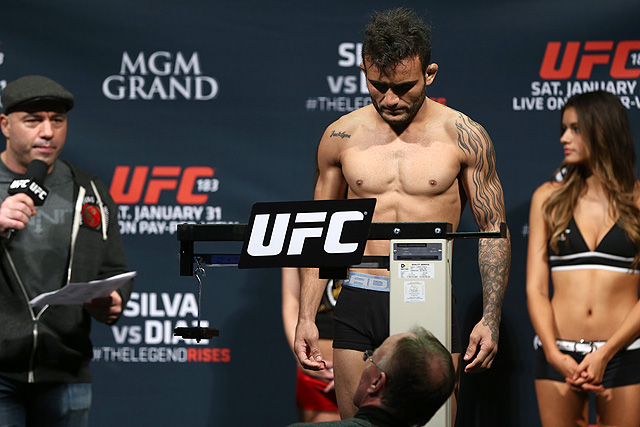 The best way to avoid such problems going forward, of course, is to move up a division. Both Gastelum and Lineker missed weight ahead of their UFC 183 bouts; Gastelum checked in at 180 pounds for his welterweight clash with Tyron Woodley, while Lineker tipped the scales at 130 pounds for his flyweight matchup with Ian McCall.

White told Combate on Saturday that UFC 183 will be the last time that Gastelum and Lineker compete in their current weight classes.

Gastelum was the middleweight winner of “The Ultimate Fighter 17,” but he dropped to 170 pounds after defeating Uriah Hall at the show’s finale. The Yuma, Ariz., native is 4-0 at welterweight, but has struggled on the scale since making the move, including missing weight ahead of a UFC Fight Night clash with Nicholas Musoke this past June.

Lineker, meanwhile, would be one of the flyweight division’s top contenders if he were able to consistently make weight. The Brazilian known as “Hands of Stone” has won five of his last six outings, but Friday marked the fourth time he has failed to hit the contracted flyweight limit. Lineker primarily competed at bantamweight in Jungle Fight prior to signing with the UFC.