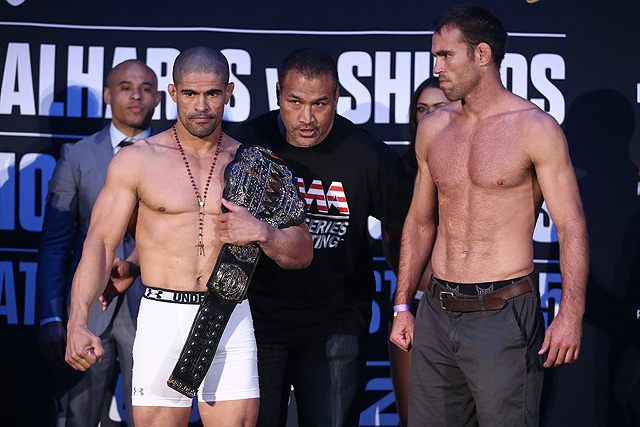 Rousimar Palhares and Jake Shields could be in hot water with Nevada. | Photo: Dave Mandel/Sherdog.com


Both Rousimar Palhares and Jake Shields have received temporary suspensions from Nevada Athletic Commission, according to a report from the Las Vegas Review-Journal on Tuesday.

Palhares submitted Shields with a kimura 2:02 into the third round of their WSOF 22 headlining fight at the Planet Hollywood Resort and Casino in Las Vegas this past Saturday. Palhares appeared to crank the submission for several seconds after Shields tapped, and referee Steve Mazzagati had difficulty prying the Brazilian free from the maneuver. Once the fighters were separated, Shields threw a punch at his opponent.

After the bout, Shields called Palhares a “dirty fighter” and accused him of gouging his eyes repeatedly earlier in the fight. WSOF President Ray Sefo announced earlier Tuesday that the promotion had suspended Palhares indefinitely and stripped him of his welterweight title. WSOF did not take any immediate action against Shields.

According to the report, both Palhares and Shields will be placed on the NAC’s Sept. 13 agenda, where further disciplinary action will likely be scheduled.