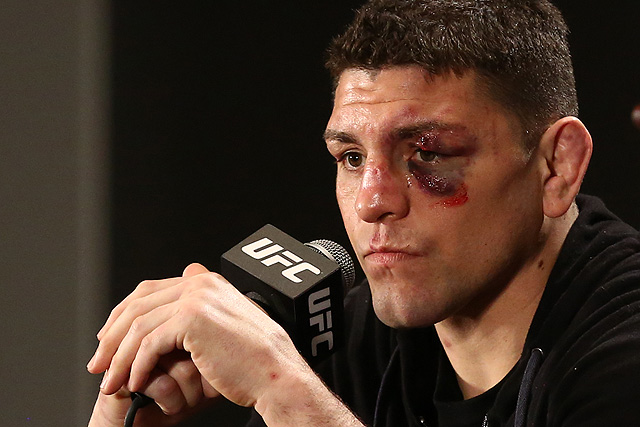 
Nick Diaz tested positive for marijuana in a post-fight drug test following the UFC 183 main event, according to a report from Yahoo Sports.

Diaz tested over Nevada’s allowable limit of 150 ng/ML for marijuana metabolites, although the exact amount in the fighter’s system was not available as of this writing. It is the Stockton, Calif., native’s third failed test for marijuana in the state. Diaz lost to Anderson Silva via unanimous decision in the UFC 183 headliner at MGM Grand Garden Arena in Las Vegas this past Saturday.

Diaz also tested positive for marijuana following a win over Takanori Gomi at Pride Fighting Championships 33 on Feb. 24, 2007; the Nevada Athletic Commission would overturn that victory to a no contest. Diaz was suspended for six months and fined 20 percent of his purse.

Nearly five years later, the former Strikeforce champion again tested positive for marijuana following a unanimous decision loss to Carlos Condit at UFC 143 on Feb. 4, 2012. Diaz was later suspended for one year and fined 30 percent of his purse from the bout.

Diaz will likely have his license temporarily suspended and must appear before the commission before he can fight again. As a third-time offender in Nevada, Diaz could face an even more stern punishment this time around. The NAC’s next meeting is scheduled for Feb. 17.

"The UFC has been notified by the Nevada State Athletic Commission that Nick Diaz has tested positive for marijuana metabolites following his fight with Anderson Silva at UFC 183 on Jan. 31 in Las Vegas, Nev. The UFC has a strict, consistent policy against the use of any illegal and/or performance enhancing drugs, stimulants or masking agents by our athletes. As a result of his positive test, Diaz has been informed that he has violated the UFC Fighter Conduct Policy and Promotional Agreement with Zuffa, LLC. The UFC organization will fully respect the Commission’s final decision relating to Diaz at a disciplinary hearing set for February 17."