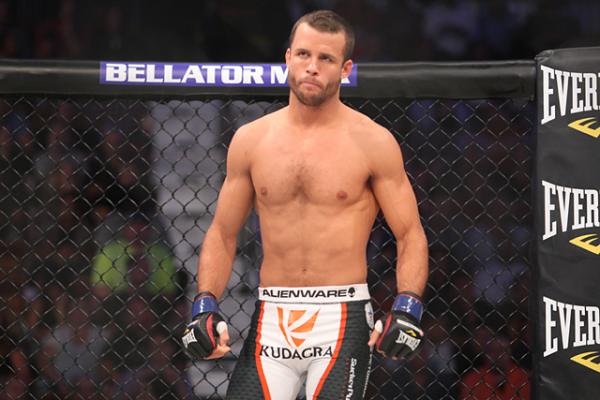 
Prior to his featherweight title defense against Patricio Freire at Bellator 123, Pat Curran decided to make a significant change.

For the majority of his career, the Bellator veteran was a fixture at Team Curran in Crystal Lake, Ill., the gym own by his cousin, former UFC and WEC competitor Jeff Curran. The arrangement worked well, as “Paddy Mike” has long been regarded as one of the best featherweights outside the UFC and was in the midst of his second reign as Bellator MMA 145-pound king.

However, mixed martial artists are often a nomadic bunch, constantly seeking to avoid stagnation. Curran decided to seek out a fresh perspective ahead of last September’s rematch with Freire, which led to him setting up shop at Team Takedown in Arlington, Texas.

At the time, the pairing seemed ideal. Not only was it an opportunity to align himself with a camp on the rise, but Curran’s parents were close by as well. The Illinois native declared that he “couldn’t be happier” with the way things were going and declared that a full-time move to the Lone Star State was in the offing.

Things changed after Bellator 123. That night, Curran dropped the belt to Freire in a performance that he bluntly describes as “terrible.” Whether that was the sole impetus for his decision to return to his cousin’s gym is not entirely clear, but Curran does admit that, at least in this case, returning to his “comfort zone” was the right move for his career.

“At the time I was caught in the moment. I had a great time at Team Takedown down in Texas. I was closer with my parents, and it was a great environment down there,” Curran told Sherdog.com. “In the end, I want to stick to my roots. I’m back to my comfort zone here in Crystal Lake. I’m back with my support system, my head coaches Jeff Curran, Doug Mango, all my training partners. Overall, just back to where I belong.”

Team Curran will be in his corner on Friday, when he squares off against submission specialist Daniel Weichel in the Bellator 133 co-main event at Save Mart Center in Fresno, Calif. The evening’s main card airs on Spike TV beginning at 9 p.m. ET/7 p.m. PT and is headlined by a middleweight showdown between Alexander Shlemenko and Melvin Manhoef. The preliminary card streams on Spike.com beginning at 8 p.m. ET/5 p.m. PT.

“I made a couple decisions that didn’t work out in the end, but everything happens for a reason,” Curran said. “I’m taking it as a learning experience, and I’ve got to make the most of it. Everything is going fantastic. Training is going well. It’s actually going better than before. I’m really growing as a person and as a fighter. I’m looking to showcase that in the Bellator cage.”

Leaving a longtime training home, even temporarily, can lead to some hard feelings. Emotions tend to run even higher when it’s also a family affair. Curran admits that he had to do some damage control upon initially returning to Crystal Lake.

“Oh yeah, big time,” Curran said when asked if there was tension between him and his cousin at first. “But in the end, family’s family. Everybody has their problems, their issues -- not just me and my family, but families in general. In the end, you’re family. You’ve just got to look past that and move on, just grow from it. It was a little difficult for me at first because of all the decisions I’ve made, but I was able to work through those and everything was really starting to fall into place. And, just overall, I’m feeling great as a fighter. Mentally and physically, I couldn’t be more ready for this fight.”

Some of that readiness no doubt stems from Curran’s new-found affinity for film study. In the past, he would simply allow his coaches to fill in the blanks for him. Now Curran is doing his homework. Not only does that include footage of past fights, but Curran also reviews his work in the gym.

“[In the past] I just did what I was told, trained and went to the gym and put my work in. Now I’m starting to film my sparring and my grappling and my pad sessions. I just get obsessed with it. I go home and I’m able to look at in a different view, a coaches view, and I can really critique myself,” he said. “I want perfection, so I’m trying everything possible to change my bad habits and work on things I see that are working. I write all this down so I keep it fresh in my head, take it to the coaches to review it. It’s really helping me to stay motivated, focused and just be creative.

“It’s really helping me get ready for this fight, and I love it. It’s something I’ve never done before and it’s kind of a new thing for me.”

One fight Curran doesn’t dwell on is the recent loss to Freire. While he has seen the tape, it’s something he would rather forget.

“I don’t like to overwatch it. I saw it a couple times, and I don’t need to see it after that,” he said. “I know I’m a better fighter than that. When I see a performance like that I throw it out the window. That’s garbage. Don’t watch it anymore; that’s not me. I watched it right after the fight. I just don’t need to go back and watch.”

Curran has spent more than enough of his time on Freire and Daniel Straus in recent years. The ex-champ has faced either one or the other in four of his last five bouts -- all with titles on the line. Bellator 133 will mark Curran’s first non-title fight since Aug. 20, 2011, when he knocked out Marlon Sandro with a head kick to become the promotion’s first two-division tournament winner.

Although the stakes aren’t quite as high against Weichel, the chance to prepare for a different opponent has been a refreshing change of pace. Weichel enters the bout with a 3-0 mark in Bellator, having conquered the promotion’s final featherweight bracket last year. The German is a former M-1 Global champion with a penchant for submissions: 21 of his 34 career triumphs have come via tapout.

“You can only fight the same guys so many times and then you get bored of it. But Daniel brings a very unique game. He’s a very dangerous submission artist,” Curran said. “He’s been fighting for a long time. You can tell he’s very durable, very tough. He’s not afraid to exchange and stand in the cage. His submission game is something you’ve definitely got to watch out for. He gets a hold of your neck or a hold of a submission, he goes 100 percent. He’s looking to make a name for himself, make it up through the ranks and get a title shot.”

As someone who has been consistently around the Bellator title scene, Curran knows a little something about his opponent’s aspirations. With familiar faces around him and a more studious approach, he believes he has taken the proper steps to get back on track. All that’s left is to perform on fight night.

“This fight is very important to me because it could make or break my career. I’m very motivated and focused to go in there and put on the performance of my life. I feel like I need to, especially after my last performance against ‘Pitbull,’” Curran said. “If I want to be a title contender or have a title shot again I have to go in there and perform like I belong as a champion.”