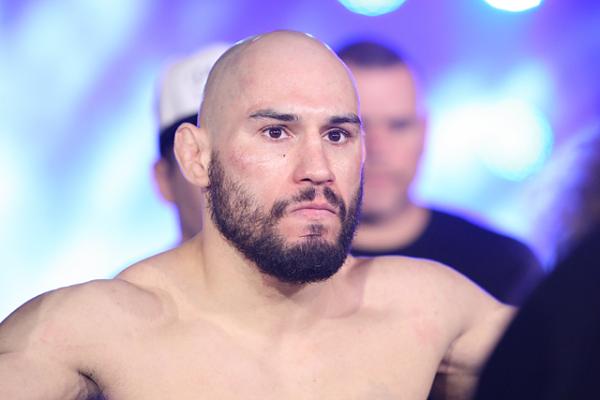 
Rick Hawn captured the Titan Fighting Championship lightweight title with a split decision over Pat Healy in the Titan FC 35 “Healy vs. Hawn” main event on Saturday at the Clark County Fairgrounds Event Center in Ridgefield, Wash. Scores were 48-47 and 49-46 for Hawn, 48-47 for Healy.

Healy fought like he always does, with dirty boxing, powerful takedowns and a granite chine. However, Hawn was at times superb, as he rocked “Bam Bam” repeatedly with overhand rights, unleashed sizzling leg kicks and mixed in a few judo throws for good measure. He darted in and out, controlling the pace for much of the match.

The Strikeforce veteran busted up Hawn’s face during their five-round tussle, and he had the judoka in a precarious position as time expired in round five. Unfortunately for Healy, he could not sink the rear-naked choke. Hawn was a step faster and slightly superior overall, and it showed on the scorecards. The 39-year-old Hawn contemplated retirement afterward but remained non-committal.

The loss capped off a disappointing weekend for Healy. He originally entered the matchup as the champion, but his failure to make weight -- he missed by three pounds -- resulted in his being stripped of the title. Had he beaten Hawn, the championship would have been considered vacant.

In the co-headliner, Andre Harrison held on to his Titan featherweight championship by edging former titleholder Desmond Green across five rounds. Harrison was awarded 49-46, 49-46 and 48-47 scores from the judges.

The 25-minute fight was largely devoid of action, as Green seemed unwilling to engage with the undefeated titleholder, save for a few takedowns. The crowd became agitated and showered both men with boos, though it had no impact on the pace. Ultimately, Harrison delivered more takedowns and connected on a few more strikes.

Meanwhile, Titan flyweight champion Tim Elliott had no worries about a dull fight with Felipe Efrain, as he locked up a wicked one-arm guillotine choke in the second round. Efrain tapped 2:30 into round two.

The two 125-pounders tore into each other throughout the opening frame, and Efrain more than held his own. However, when the challenge shot in on a deep double-leg takedown, he fell into a tight guillotine on the way down. Elliott never let go and cranked the choke until the tapout came.

In undercard action, Steven Siler submitted Austin Springer with a guillotine choke 64 seconds into the first round; Belal Muhammad outworked Zane Kamaka to a unanimous decision, earning 30-27 scores on all three cards; Ricky Simon -- who will reportedly challenge Anthony Gutierrez for the Titan bantamweight championship on Dec. 13 -- was relentless in taking a unanimous verdict from Alex Soto, drawing 30-27, 30-27 and 30-26 marks from the judges; Jason Knight submitted Musa Khamanaev with a triangle choke 3:06 into the second round; Jason Novelli took a unanimous decision from E.J. Brooks, sweeping the scorecards with 30-27s across the board; Sid Bice toppled Shaine Jaime via unanimous decision, prompting 30-27, 30-27 and 29-28 scores; Zak Bucia submitted Rasul Shovhalov with a rear-naked choke 2:10 into round two; and Peter Petties knocked out Jacob Ikaika Tampos with a spinning backfist 2:51 into the first round.