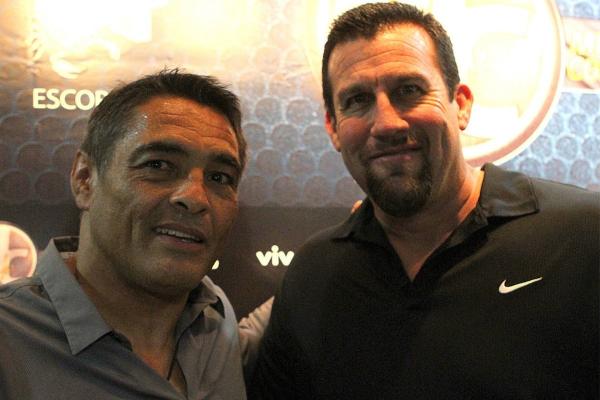 Master of Combat, the fledgling promotion created by Rickson Gracie, held its inaugural event on Thursday in Rio de Janeiro.

The show opened with a video recalling the history of the Gracie family, and a series of electrifying fights pitting Team Rio de Janeiro against Team Sao Paulo began shortly thereafter. Gracie’s goal was for the fighters to try and finish at all costs – as a result, only one bout made it past the first round.

The "Samurais" of Rio, coached by Murilo Bustamante, fell behind 2-0 against the Francisco Veras-guided "Scorpions" of São Paulo but ultimately rallied for a 3-2 victory.

The event was contested under a unique set of rules devised by Gracie. All of the athletes weighed in on the day of the fight, and all reached their agreed-upon marks. Only one fight went the distance – the first round is 10 minutes, the second is five -- and the decision was rendered not by a panel of judges, but by Gracie, referee “Big” John McCarthy and the audience.

The first matchup of the challenge pitted Sao Paulo’s Glauke Eugenio e Silva against Rio’s Jefferson Nunes. It did not take long for Sao Paulo to get the evening’s first win, as Silva caught Nunes in a kimura and elicited a tapout 46 seconds into the fight.

Next, Celso Baldow escaped an early kneebar attempt from Udi Lima but eventually succumbed to a triangle choke from the Team Sao Paulo member at the 1:52 mark of round one.

Team Rio began its comeback in the third fight, as Gerson da Silva Conceicao locked horns with Sao Paulo’s Alexandre Nunes Brandao. The first round was characterized by plenty of ineffective striking, but a beautiful takedown by Conceicao may have given him the frame.

Brandao got the better of the standup in round two, but Conceicao would eventually impose his will through a takedown and top control.

The fight was decided by votes from Gracie, McCarthy and an online vote from the audience. It was Conceicao who emerged with a split decision triumph, as both Gracie and McCarthy sided with the Team Rio fighter. Only the fans felt that Brandao had done enough to win.

Armando Sapinho tied things up for Team Rio, transitioning from a kimura to a north-south choke to submit Thiago Fernandes Lopes at 6:07 of the opening frame.

In the final matchup of team competition, Fernando Camolesi needed just 1:17 to submit Kitner Moura with a heel hook to give Team Rio de Janeiro the victory.

Vitor Miranda submitted Elton Rodrigues with a first-round arm-triangle choke in the evening’s main event. The Team Nogueira fighter played it safe on the feet in the early going before asserting his dominance on the mat. Rodrigues asked out of the contest 4:23 into the initial stanza.

Earlier, Robert Petter defeated Pety Maffort by TKO 7:52 into the first round, while Oseias Viana submitted Luciano Correa with a rear-naked choke at the 4:30 mark of the opening frame.

At the end of the night, Gracie declared the initial Master of Combat event to be a success.

"I was very pleased with the outcome of the event. We are already planning a second edition in January. It will be the beginning of a grand prix between teams," he said.