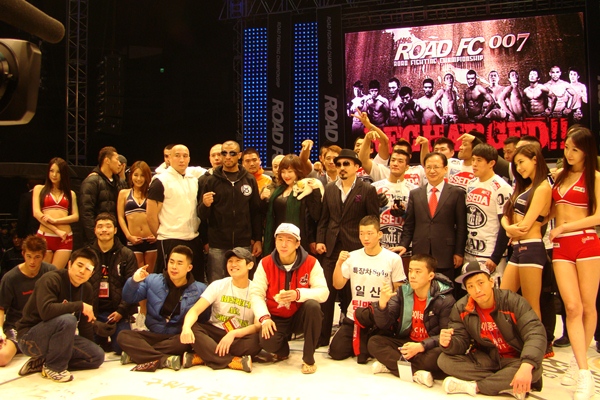 “I was just holding on there for a while,” Kang commented post-fight on the effects of a Sato right uppercut which dropped him. “I guess it was a flash knockout. I don’t remember it very well, but I made it through.”

Kang survived the scare and finished the round strong, throwing numerous three- and four-punch combinations. He maintained the momentum in the second frame with a foot-sweep takedown to open the round. Following several sweep attempts, Kang transitioned to mount, where he pounded his way into the armbar opportunity which put an end to the contest at the 2:38 mark.

In another bantamweight pairing, Daegu MMA representative Jae Hoon Moon met Team Force fighter Soo Chul Kim in a back-and forth contest of takedowns, sweeps and submission attempts that was as exciting as it was difficult to score. In the across-the-board 29-28 tally, it was Kim who took the first round, but Moon who scored just enough in the way of looping hooks to bring home the second and third, sway the judges and advance in the tournament.

A featured catchweight contest pitted UFC veteran and Pan-American BJJ champion Roan “Jucao” Carneiro against Jung Hwan Cha, who had fought only twice since 2008 due to South Korea’s compulsorily military service, but whose ledger includes a major upset of Ryo Chonan in 2010. Unfortunately for Hwan, however, this outing appeared to go down like an instructional video where he supplied the passive resistance. The exact sequence was left-right hooks to double-leg takedown, half-guard transition to back mount, hooks to body triangle, methodical softening-up with strikes interspersed with rear-naked choke attempts, culminating in the tight armbar that forced referee Duk Young Chang to step in on the injured Hwan’s behalf with just 19 seconds left in the opening round.

In lightweight action, Hatsu Hioki training partner Takasuke Kume faced “Crazy Monkey” Hyung Suk Lee, who accepted the bout on short notice for an injured Chang Hyun Kim. In what looked like an equalizing factor, Kume was badly cut and bleeding into his left eye after his brow hit Lee’s hip during an early double-leg shot. After being cleared to continue, however, Kume scored a takedown and worked from side control to apply a slick armbar that had Lee’s arm fully extended at the bell.

In the second round, Lee found himself in an arm-in reverse triangle choke, where a little pounding supplied all the distraction needed for Kume to transition to an armbar and coax a tap at the 54-second mark. Kume has now won six in a row, all by way of submission.

Looking somewhat emaciated, Jae Hyun So entered his bantamweight tournament bout one point behind on the scorecards after missing weight by a quarter-pound. So initially did little to engage his opponent, Team Max fighter Ming Jong Song, save for a single-leg-to-heel-hook attempt in the first round, a technique So would try twice more in the second stanza and once in the third. As the fight progressed, the limited standup exchanges gave way to significant periods of Bustamante-esque guard baiting, as the badly winded So sought to avoid the hooks and knees which ultimately earned Song a unanimous decision win.

Heavyweight Tommy Kang kicked off the main card and his professional career with a methodical, chin-tucked stalking of Team Roots fighter Eun Su Kim, who took the fight on only four days’ notice. Kang scored in the first with one-two combinations and a left hook that momentarily staggered Kim. In the second, it was four hard lead uppercuts follow by a flurry of hooks that ultimately crumpled Kim with 2:23 elapsed.

This item was updated at 3:13 a.m. ET on March 25, 2012. The article originally stated that Takasuke Kume advanced in the Road FC lightweight tournament, when in fact it was a non-tournament bout.