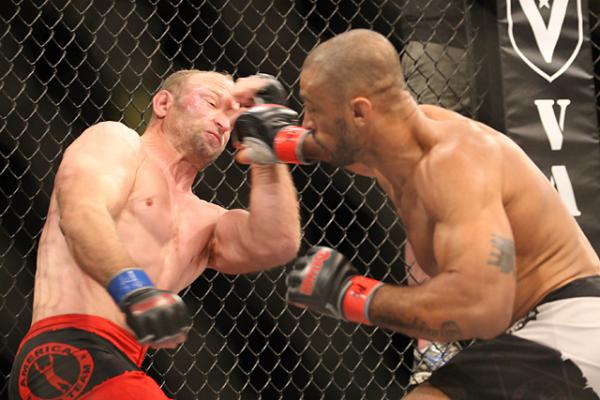 
It was only fitting that the finals of the BattleGrounds MMA “O.N.E” welterweight tournament came down to two men who had been there before.

In the end, it was Roan Carneiro who won the eight-man bracket and the $50,000 prize to go with it, as he wore down Brock Larson to win via unanimous decision at the BOK Center in Tulsa, Okla., on Friday night. All three judges scored it 30-27 in favor of the 36-year-old Brazilian, who had previously reached the finals of an eight-man field at World Cage Fighting Championships “No Guts No Glory” in 2006. “Jucao” would come up short on that night, falling to Leonardo Nascimento Lucio in the final round.

There would be no such disappointment for the American Top Team Atlanta product on Friday night.

“I can’t put into words how I’m feeling,” Carneiro said. “Three fights in one night. A tournament like this, anything can happen. I’m blessed tonight. I’m so happy man.”

Larson (39-9), who underwent testing for concussion symptoms following his three-round semifinal win, simply had no answers for the clever grappling of his opponent. Carneiro (20-9) took Larson’s back in each frame, punctuating his victory with a dominant third round. The Brazilian appeared to be on the verge of a finish in bout’s waning moments, as he took back mount and hammered away with punches to Larson’s head and body. The American survived, but by then the final outcome was inevitable.

“I’m disappointed of course,” said Larson, who won an eight-man tournament at Extreme Challenge 63 in 2005. “I came here to win. I felt like I was in a good position to win. Bottom line was, he was the better man tonight.”

In the round of four, Larson ground his way to a unanimous decision triumph over Joe Ray. All three cageside judges scored the largely uneventful bout 29-28 in favor of Larson, who ended his opponent’s seven-fight winning streak.

Ray (12-4) had his moments, but he was ultimately unable to put together enough offense to sway the judges. Larson bullied the 29-year-old with clinches, takedowns and hard punching combinations in the opening frame, but Ray responded to win the positional battle in round two. Things slowed considerably by the third period, but Larson likely clinched the victory by landing a takedown and spending the majority of the final two minutes on top.

Normally known for his grappling, Carneiro showcased his hands to move into the welterweight finals. An overhand right-left hook combination from the Brazilian dropped Trey Houston (11-3), and a salvo of follow-up ground-and-pound brought an end to their fight 2:11 into the second period.

Carneiro, who battled dehydration issues following his quarterfinal triumph, controlled the initial stanza with his grappling, spending most of the frame in full mount while peppering Houston with periodic punches from above. He attempted to do more of the same in round two, but Houston was able to return to his feet after being taken down. That set the stage for the decisive exchange, which would lead to just the second KO/TKO stoppage of Carneiro’s career.

In quarterfinal tourney action, a trio of vicious knees helped Ray move past Luigi Fiorvanti and into the round of four. The end came 2:39 into the first round, as the Tiger Muay Thai representative capitalized on his attack with a series of unanswered punches on the mat.

It was Ray’s knees, however, that altered the course of the bout. As Fiorvanti (24-12) pressed his foe against the fence, Ray rocked -- and ultimately dropped -- “The Italian Tank” with three crushing knees. An opportunistic Ray then pounced to put the fight away on the canvas.

Larson punched his ticket to the 170-pound semifinals with a second-round submission of fellow UFC veteran Cody McKenzie. The 37-year-old Minnesotan brought an end to the contest with an arm-triangle choke 1:43 into the second frame.

Larson controlled the majority of the contest from top position, twice fending off his foe’s patented guillotine in the first round. McKenzie (15-5), who reportedly donated blood to make weight on Thursday, had little to offer in the second, however, as Larson secured the choke and gradually passed to side-control to earn the tapout.

Carneiro advanced to the welterweight semifinals by tapping short-notice entrant Randall Wallace with an armbar 3:29 into the opening frame.

The Atlanta-based Brazilian took Wallace down near the fence in less than a minute into the initial stanza and moved into full mount. Carneiro then transitioned to his opponent’s back, where it appeared he was attempting to set up a rear-naked choke. Instead, the 36-year-old transitioned to an armbar. While Wallace fought valiantly to defend the maneuver, Carneiro was eventually able to break his grip and extend the arm.

Houston kicked off the 170-pound bracket with an upset of Jesse Taylor, submitting “The Ultimate Fighter 7” cast member with an armbar 2:10 into the opening frame.

Taylor (27-12) implemented his game plan well early, as he took Houston down and went to work from top position approximately 30 seconds into the period. “JT Money” spent a relatively conservative two minutes landing single shots in his opponent’s guard, but things changed drastically when Taylor attempted to advance to side control.

As Taylor attempted to improve his position, Houston deftly shifted his hips and went belly-down on an armbar. The Miletich Martial Arts representative extended his foe’s arm and elicited the tapout moments later.