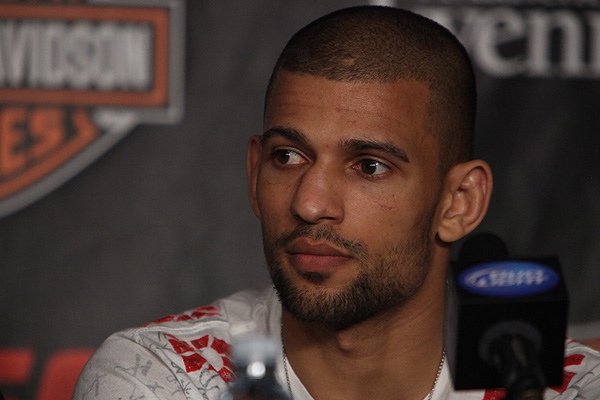 It was a case of close but not quite for Andre Winner at Wembley Stadium in London on Saturday night.

The UFC veteran battled Rob Sinclair for five hard-fought rounds in the BAMMA 10 main event, but ultimately Winner [pictured] fell to the promotion’s reigning lightweight champion via split decision. Scores were 49-46 and 48-47 for Sinclair, while the dissenting tally favored Winner 48-47. It was Sinclair’s fourth win with BAMMA and fifth straight overall, while Winner suffered his first loss with the promotion in three appearances.

After the victory, Sinclair sounded like a man who had just dodged a bullet.

“Jesus Christ, man. I tell you what, Andre has got one tough head. Andre is an amazing, amazing fighter,” said Sinclair, who went the distance for just the third time in his 14-fight professional career. “It could’ve gone either way though. A split decision – different day, different judges – in a way a split decision’s a draw, isn’t it?”

In the opening two rounds, “C-4” set a rapid pace which Winner would not be able to overcome. Sinclair did solid work in close quarters, scoring points with dirty boxing in the clinch while not allowing Winner to find his rhythm. Sinclair forced his adversary to fight with his back against the fence, consistently landing uppercuts, knees and elbows.

While Sinclair followed a similar blueprint throughout the fight, Winner upped his aggression starting in the third frame. The Team Rough House product landed his share of kicks and straight punches, but was never able to mount enough offense to throw Sinclair off his game, as the champion remained diligent with his attacks in tight.

Winner offered one final salvo in round five, dropping Sinclair and landing a series of standing-to-ground strikes as the period expired, but it was not enough to turn the tide.

In the co-main event, Jack Marshman proved that he is much more than just a striker. Marshman found himself on his back approximately 15 seconds into his middleweight showdown with Andrew Punshon. Normally, that wouldn’t bode well for the serving British paratrooper, who owns eight of his 11 career triumphs by knockout or technical knockout, but “Hammer” showed that his skills are evolving, as he scored a surprising triangle submission at the 2:31 mark of the opening frame.

While Punshon attacked his foe with punches in guard, Marshman threatened with an armbar. Punshon then briefly transitioned to a toehold before moving back into top position. Marshman remained active from below, and it didn’t take long before he had The Lodge Fightclub member in a precarious situation. With the triangle secured, Punshon appeared to tap multiple times before referee Mark Woodard finally intervened to halt the bout.

“I’ve just been working on my ground a lot,” Marshman said. “I started jiu-jitsu before I started boxing. So I just improved in that area even more.”

However, Marshman failed to make weight and did not retain the BAMMA middleweight title for his efforts.

“After fighting Tom (Watson), I decided I needed to put a little bit of size on because I’m too small for the weight, “Marshman said. “I did that, and I found the cut really difficult. I came in a pound over, and I’ve lost my belt.”

Earlier, 39-year-old Denniston Sutherland gave a performance that belied his age, as the England-based Jamaican dominated Lee Barnes for three rounds en route to a unanimous decision victory in a featured middleweight tussle. All three judges scored the bout 30-27 in favor of Sutherland.

“Let me just say big respect to [Lee], because he brought a lot more than I thought he would,” Sutherland said. “I’ve never seen him quit in a fight, so big props to him.”

Barnes, 28, proved his durability throughout the contest but struggled to mount any significant offense other than a few short-lived takedowns. For the most part, it was Sutherland who maintained the dominant positioning and punished his opponent with a variety of knees, short elbows and punches.

Barnes’ best moment came in round two, when he slammed Sutherland and achieved full mount. However, the Wolfslair Academy product struggled to create space and was unable to take full advantage of the opportunity.

Elsewhere, three-time UFC competitor Curt Warburton took a unanimous decision from Lee Wieczorek in a lightweight clash. All three judges scored the contest 30-27 for Warburton. F’s Freestyle member Tom Brees remained unbeaten by submitting Jack Magee with a triangle choke at 3:19 of the first round in a 170-pound tussle.