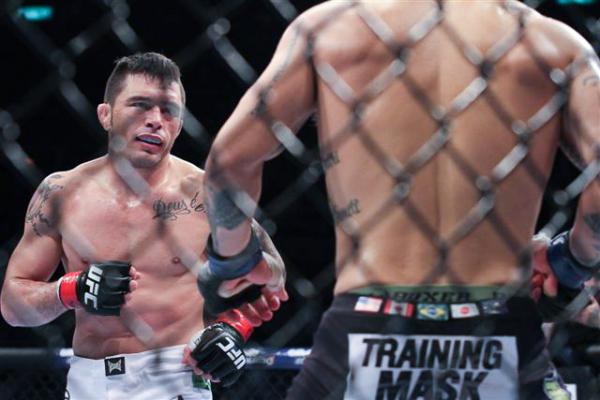 
Two new bouts are now official for the UFC’s next visit to Brazil, including a featherweight confrontation between Robbie Peralta and Rony Bezerra.

Formerly known as UFC Fight Night “Dos Santos vs. Miocic,” the May 31 event is now being referred to as “The Ultimate Fighter: Brazil 3” finale. Broadcast plans have not yet been announced for the card, which is headlined by a titular heavyweight collision between ex-champion Junior dos Santos and Stipe Miocic. The show will also feature a preliminary bantamweight pairing pitting Pedro Munhoz against Matt Hobar.

Peralta has won 10 of his last 12 bouts. “Problems” last competed on Dec. 28, when he scored a third-round technical knockout over Estevan Payan at UFC 168.

Bezerra has won nine of his last 10 outings, posting a 4-1 Octagon record in his last five. After suffering a 40-second knockout at the hands of Jeremy Stephens last October, “Jason” rebounded last month, stopping Steven Siler in just 1:17 at UFC Fight Night 39.

Munhoz suffered the first defeat of his pro career in his last bout, dropping a unanimous decision to Raphael Assuncao this past February at UFC 170. Prior to that setback, “The Young Punisher” had won 10 straight fights, knocking out seven victims and capturing Resurrection Fighting Alliance gold along the way.

Hobar rides a three-fight winning streak into his Octagon debut and last fought in July, when he submitted Angel Huerta with a first-round rear-naked choke to win the Legacy Fighting Championship bantamweight title.