Luke Rockhold was too much for Keith Jardine Saturday in Las Vegas. | File Photo: Sherdog.com


Luke Rockhold cemented his status as one of the world’s best middleweights at the expense of UFC veteran Keith Jardine.

Rockhold retained his Strikeforce middleweight championship and knocked out Jardine in savage fashion in the Strikeforce “Rockhold vs. Jardine” headliner on Saturday at the Hard Rock Hotel and Casino in Las Vegas. Jardine, who was making his first appearance at 185 pounds after a successful run at light heavyweight, met his end at the hands of the young champion 4:26 into round one.

“It means a lot,” said Rockhold (9-1, 8-0 SF), who will carry an eight-fight winning streak into his next bout. “He’s tough, and he came to fight. Too bad for him, I love fighting. When the cage door shuts, I feel like it’s my world.”

Aside from Jardine’s trademark leg kicks, Rockhold had no problems with the man they call “The Dean of Mean.” He softened Jardine with knees to the body from the clinch and an exquisite spinning back kick to the gut. A right hand wobbled Jardine (17-10-2, 0-1-1 SF) and sent him reeling backwards, the champion in hot pursuit. Rockhold landed another clean right that put down the challenger, and then he swarmed. With Jardine on the ground, first in a seated position and later defenseless on his side, Rockhold handed him a gnarly beating at the base of the cage.

“I knew I was too quick, a little too much footwork,” Rockhold said. “I could sit back and hit that counter right hand.”

Rockhold, who was originally booked to meet Tim Kennedy, appeared indifferent when the idea of reconstituting the matchup was brought forth.

“I like to fight, I like getting paid, but I love the competition,” he said. “Right now, all the best guys are in the UFC. Those are the guys I want.”

Amagov (9-2-1, 2-1 SF) scored with a takedown inside the first 15 seconds, but shot himself in the foot when he was docked a point for an illegal knee strike to the head of his grounded opponent. The blow afforded Lawler a brief respite and, more importantly, the opportunity to return to his feet.

“It bothered me a little bit but not too much,” Lawler said. “It was just a grazer. I thought he was going to go to my chest.”

After the restart, Lawler launched himself skyward and clipped Amagov with the knee. The Russian crumpled to the floor, and Lawler let loose with a series of power shots that resulted in the finish. It was the 11th first-round stoppage of his career.

“I was going to get right in his face and bomb on him,” Lawler said. “I’m happy to win. I’m going to go back to the drawing board, work on all my skills and look to keep knocking people out.” 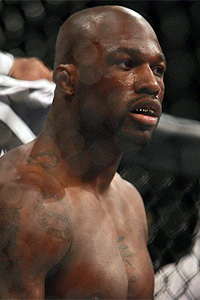 Outside of a few Larkin right hands at the end of the first round and the start of the second, Lawal (9-1, 4-1 SF) pitched a shutout. He grounded the striker with takedowns in both rounds and hammered away with heavy punches and elbows from inside guard. Larkin (12-1, 3-1 SF) finally broke in round two, as Lawal put him on his back and unleashed a series of hellacious right hands that forced the stoppage.

Perfect in two appearances since undergoing reconstructive knee surgery, Lawal has positioned himself as a leading contender for the vacant Strikeforce light heavyweight title.

“The next person’s taking a beating like that, too,” he said.

American Top Team’s Tyron Woodley kept his perfect professional record intact, as he grinded his way to a split decision over fast-rising Canadian prospect Jordan Mein in a welterweight showcase. Two of the three judges, Tony Weeks and Marcos Rosales, rewarded Woodley with 29-28 and 30-27 scorecards; a third, Glenn Trowbridge, ruled it 29-28 in Mein’s favor.

Woodley worked some kicks to the body and legs in the opening moments, but it became apparent he had no interest in engaging his 21-year-old opponent on the feet. A two-time All-American wrestler at the University of Missouri, Woodley outworked Mein (23-8, 1-1 SF) in the clinch and struck for takedowns in all three rounds. Woodley kept Mein pinned to the mat, limiting the Canadian to occasional elbows from the bottom.

Content to remain in Mein’s guard, Woodley threw out short punches and scattered elbows from the top, as he went the distance for the third consecutive fight.

“He’s a long kid,” Woodley said. “He stretches you out. Jordan Mein is one of the toughest guys in our weight class, which is why the fight excited me. Overall, I think I did well. I wish I had been more aggressive with my strikes.”

Woodley (10-0, 8-0 SF) has designs on the vacant Strikeforce welterweight crown.

“I should be fighting for the title next,” he said, “no matter who it’s against.”

Welterweight contender Tarec Saffiedine weathered a harrowing first round to win for the fifth time in six appearances, as he took a split decision from Bellator Fighting Championships veteran Tyler Stinson in a preliminary encounter at 170 pounds. Two of the three cageside judges, Adelaide Byrd and Patricia Morse-Jarman, ruled in favor of Saffiedine (12-3, 4-1 SF) by 29-28 and 30-27 counts; a third, Lester Griffin, scored it 29-28 for Stinson.

Stinson (22-8, 1-1 SF) had Saffiedine on his heels in round one, as he wobbled and bloodied the Belgian with a beautiful standing elbow in the clinch. Saffiedine survived the blow and subsequent left hooks, carrying the fight into the second period. There, the Team Quest standout turned to takedowns and ground-and-pound, altering the complexion of the fight.

Saffiedine, bleeding from multiple facial cuts, scored with a powerful double-leg takedown in the third round and again plastered his foe with short elbows and punches to the head and body. After a late restart, Stinson closed with a punches-and-kicks flourish, but it was not enough to impact the scorecards.

“It wasn’t my best performance tonight, but I got the job done,” Saffiedine said. “Tyler is a really tough opponent. He caught me in the first round.”