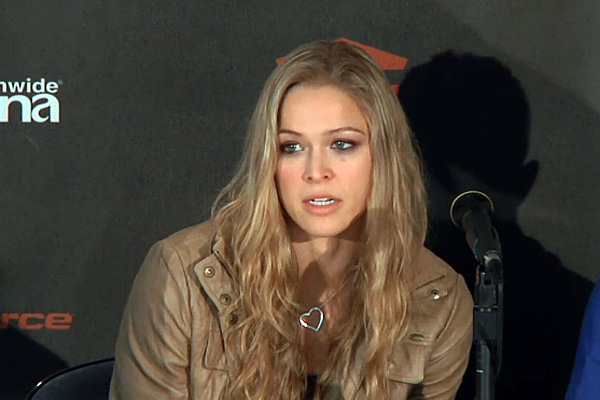 A strange inevitability has greeted those who have challenged Ronda Rousey, and Sarah Kaufman was the latest to experience it.

Rousey retained her women’s bantamweight crown in the Strikeforce “Rousey vs. Kaufman” headliner on Saturday at the Valley View Casino Center in San Diego, as she submitted the former champion with a first-round armbar. Kaufman tapped out 54 seconds into round one.

Still undefeated and unchallenged, Rousey (6-0, 4-0 Strikeforce) has finished all six of her opponents with armbars in the first round, five of them in less than a minute.

“I have great coaches,” Rousey said, “and I listened to what they said.”

The 25-year-old champion punched her way into an immediate clinch and brought Kaufman (15-2, 6-2 Strikeforce) to the ground with a beautiful inside trip. Rousey mounted and transitioned to the armbar without hesitation, and a brief but fruitless struggle from the challenger could not undo the maneuver. Beaten for just the second time as a professional, Kaufman had nowhere to turn but surrender.

“Ronda put on a great performance,” she said. “I’m embarrassed by my performance. I don’t know what else to say. Ronda did a great job of getting the armbar. I defended, but she ended up getting it. I’m really disappointed. I wanted to land some good, quality strikes, but it didn’t happen tonight.”

Afterward, Rousey turned her attention towards former 145-pound champion Cristiane Santos, whose suspension for a positive test for performance-enhancing drugs expires in December.

“People want to see you in the first fair fight of your life,” Rousey said. “I’m the champ now. The champ doesn’t go to you. You come to the champ. Come down to 135 [pounds], and let’s settle this.”

Souza countered the oncoming wrestler with a short right hook, flooring and badly damaging Brunson (9-2, 3-1 Strikeforce). Referee Mike Beltran afforded the three-time collegiate All-American a chance to recover, but Souza had other ideas. The Brazilian followed up with a volley of ground strikes that brought it to a decisive close.

“All my training partners talk about my hands,” Souza said. “I came very prepared for this fight. I was very confident and did my best.”

File Photo
Saffiedine has won three straight.
Tarec Saffiedine scored with accurate combinations, countered with effect and defended takedowns beautifully in a unanimous decision over Roger Bowling in a featured welterweight affair. Saffiedine (13-3, 5-1 Strikeforce) swept the scorecards by identical 30-27 counts, as he won for the sixth time in seven fights.

Bowling (11-3, 4-3 Strikeforce) was a factor from beginning to end. The 29-year-old Team Vision representative held nothing back in unleashing heavy power punches to Saffiedine’s head and body. The Belgian answered with savage knee strikes from the clinch, some of them slamming into Bowling’s midsection, others finding their marks up top.

Saffiedine tightened his hold on victory late in the third round, as he sprawled on a desperate Bowling takedown attempt and moved to back mount in the final minute of the fight. The Team Quest standout fished for the choke, and though he failed to finish it, the message was sent.

“I have awesome coaches,” Saffiedine said. “They helped me out with my technique. I felt really good and had an awesome training camp.”


Anthony Smith posted his ninth victory in 10 appearances, as he submitted Lumumba Sayers with a first-round triangle choke in their featured middleweight bout. Smith (17-8, 2-1 Strikeforce) finished it 3:52 into round one.

A mad scramble resulted in Sayers being mounted a little more than half a minute into the match. Smith drew blood with some elbows before the two 185-pounders returned to an upright position. The Nebraskan then slipped while dodging a wild haymaker from Sayers. He lured the Coloradan into his guard, isolated his right arm and cinched the choke. Sayers (6-3, 2-2 Strikeforce) had no choice but to concede defeat, his modest two-fight winning streak a thing of the past.

“I actually slipped on something after I threw a big hook,” Smith said. “Instead of leaving my chin out there, I went to my back because I’m comfortable there. I tried to control his head and then got control of his wrist and finished it. That’s my trademark; I triangle everybody.”


Former University of Tennessee linebacker Ovince St. Preux knocked out T.J. Cook with a searing left hook in the third round of their light heavyweight showcase. The blow brought it to a close 20 seconds into round three, as St. Preux (12-5, 6-1 Strikeforce) won for the ninth time in 10 appearances.

Armed with a four-inch height and seven-inch reach advantage, St. Preux leveled the Floridian with a left hand in the first round and swarmed him with punches. To his credit, Cook weathered the barrage, returned to his feet and fired back with a right hook that had the Volunteer on his heels. Neither man could maintain the frenetic pace.

St. Preux secured a double-leg takedown in round two and later mounted Cook (12-5, 1-2 Strikeforce), further draining his already depleted gas tank. It became clear as the third round opened that Cook had little left to offer. Less than a half minute in, he lay unconscious on the canvas.