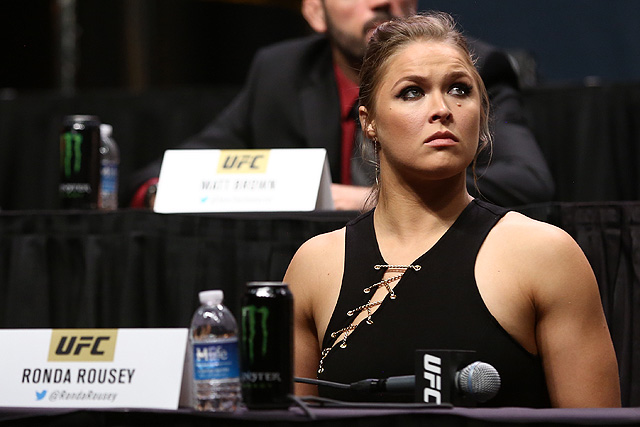 
Ronda Rousey has some strong opinions regarding the punishment the Nevada Athletic Commission levied against Nick Diaz earlier this week.

Diaz was suspended five years and fined $165,000 for testing positive for marijuana following his loss to Anderson Silva at UFC 183 on Jan. 31. The UFC welterweight failed just one of the three drug tests administered during a five-hour period on the night of the event. The two negative results came from the Sports Medicine and Research Testing Laboratory, a World Anti-Doping Agency accredited lab, while the positive test came from Quest Diagnostics, which is not WADA accredited. The NAC ultimately decided that Quest’s testing methods were more “sophisticated.”


Advertisement
Rousey was not pleased with the NAC’s decision.

“It’s not right for him to be suspended five years for marijuana. I’m against them testing for weed at all,” Rousey said during a press conference in Melbourne to promote UFC 193. “It’s not a performance-enhancing drug. It has nothing to do with athletic competition; it’s only tested for political reasons. They say, ‘It’s only for your safety to keep you from hurting yourself because you’re out there.’ You know what, then why don’t they test for all the other things that could possibly hurt us that we could be under the influence of while we’re out there?”

The NAC has come under fire this week in large part because it appeared to have a vendetta against Diaz, who has twice previously tested positive for marijuana in Nevada and has had repeated issues properly filling out pre-fight medical questionnaires. Meanwhile, Silva, who defeated Diaz via unanimous decision before the result was overturned, received a one-year suspension -- retroactive to Jan. 31 -- for testing positive for steroids. The disparity in the punishments touched a nerve with many in the MMA community, including Rousey.

“Nick is a close and dear friend of mine, so of course I’m going to defend him,” she said.

“It’s so unfair if one person tests for steroids, that could actually hurt a person, and the other person smokes a plant that them happy, and he gets suspended for five years, where the guy that could have hurt someone so much that he could’ve died in there gets a slap on the wrist. It’s not fair. It’s not fair at all.”

UFC President Dana White was more diplomatic when asked for his thoughts on the matter, claiming that his promotional duties Down Under have not allowed him to fully assess everything that happened between Diaz and the NAC.

“I don’t know enough about the Nick Diaz situation. That happened while we were here. I’ll get back into the office on Friday and figure out what’s going on with that thing,” White said. “The answer is: it seems a little rough. I’ve got to get back there and see what the details are and what’s going on. I would imagine if they suspended him for five years and $150,000 it’s more than just marijuana. That just doesn’t make sense.”

If it were up to Rousey, however, Diaz would face a much more lenient punishment.

“It doesn’t make me a bad person for saying it. I can’t believe it’s not being said more. I think they really should free Nick Diaz,” she said. “It’s not Dana’s decision either; you can’t get mad at him. He had nothing to do with it. I’m sure if he had the choice... he would have given him a lot less.

“I don’t think that marijuana should be part of the conversation at all. I think it’s an invasion of privacy for them to test for it and they have no right.”