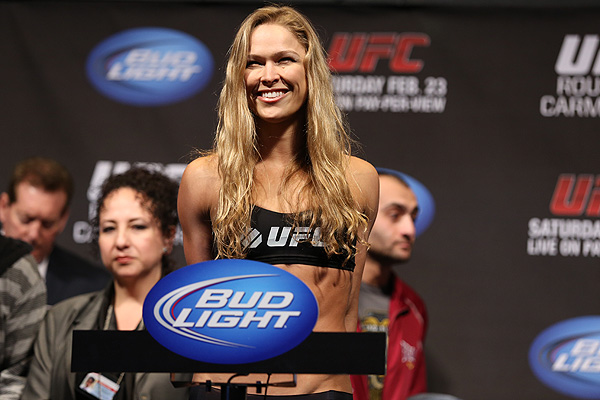 Season 18 of “The Ultimate Fighter” will feature both female coaches and competitors for the first time in the show’s history.

UFC President Dana White announced the news Saturday night at the conclusion of the UFC 158 preliminary card on FX. Ronda Rousey will serve as one coach on the reality series, squaring off against the winner of Miesha Tate’s April 13 showdown with Cat Zingano at the “TUF 17” finale.

In addition to announcing the coaches, White also revealed that the season will showcase both male and female 135-pound talents living under the same roof in another “TUF” first. Open tryouts for the season begin April 15.

Rousey, 26, has yet to taste defeat in MMA, submitting Tate in March of last year to win the Strikeforce bantamweight crown. “Rowdy” then successfully defended her belt against ex-titlist Sarah Kaufman before signing with the UFC, where she was named the organization’s inaugural women’s champion. The Olympic judoka was last seen on Feb. 23, submitting Liz Carmouche with her patented armbar in the main event of UFC 157.