BRASILIA, Brazil -- The crowd that showed up in force at the Nilson Nelson Gymnasium in Brazil's capital witnessed heavy fighting at Shooto Brazil 22, where three Shooto South American titles were on the line. No one was more impressive in capturing gold than hot light heavyweight prospect Ronny Markes.

A Nova Uniao Kimura product who also trains with Glover Teixeira and Pedro Rizzo, the 22-year-old Markes needed little work to beat little-known Diogo Osama. Markes immediately sought to corner his opponent. As soon as he did, he landed a straight right, and ended the fight with a series of follow-up punches in just 45 seconds.

"I trained hard for this fight, I have great training partners, and was prepared for whatever might happen in the ring. Now I will celebrate this victory and focus on my next challenge; one that will be hard," said Markes, who will face veteran Paulo Filho on April 29 at International Fighter Championship in Recife.

The Natal native is now 10-1 in MMA, with just one fight going to the judges. 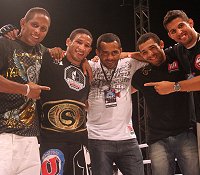 G. Venga
Hacran Dias credited Nova Uniao
for his win.
The fight lasted three rounds, with Dias dominating much of the dispute on the ground. In the third round, however, Dias tired and his opponent was game almost pulling off the upset. Ultimately "Barnabe" was able to hear the final bell, where he took the unanimous decision and the Shooto South American lightweight title.

"I mirror my training partners, such as [Jose] Aldo, Marlon Sandro and all others. Training with them I'm ready for anything. These guys were instrumental in my victory," said the champion.

The Shooto South American 183-pound champion, Carlos "Indio" Pereira, had his opponent changed twice, but was by no means discouraged. Leandro "Batata" Silva was injured and replaced by Eder Jones, who in turn was injured a week before the clash and substituted by Julio "Junior" Beba.

The fight was thrilling. Beba surprised notching a knockdown early in the match, but failed to finish. "Indio" recovered, scored a knockdown of his own and punished his opponent with punches until referee Claudio Moreira saved Beba at 3:26 of the first round, allowing the champion to retain his title.

"I want to dedicate this victory to my team who gave me every support. The fight was tough, but I was very focused and got the victory," said "Indio" after the bout.

UFC veteran Ronys Torres featured in one of the most anticipated fights of the night against the tough Guilherme Mattos Rodrigues of Natal in a 165-pound catch-weight bout. Torres would not have any of the initial striking and quickly took "Kioto" to the ground, where he dominated him. Torres worked the ground, nearly tapping Rodrigues with a kimura. The Amazon native eventually got his finish with a guillotine choke at 4:33 of the first round. 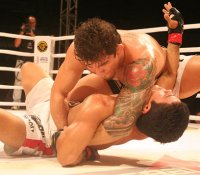 
"I train to finish the fight as quickly as possible and all was fine. I'm very happy, thank God," celebrated Torres, who won his second straight bout after three consecutive losses inside the UFC.

The newest revelation out of Parana, John Lineker, dominated Saulo Martins both standing and on the ground.

Lineker, who entered the ring with a shirt memorializing Brazilian MMA manager Ivan Canello who tragically passed away last month, punched out his foe at 3:30 of the first round.

The 20-year-old native of Paranagua has now won nine straight bouts in a 14-month span, including Nitrix's bantamweight tournament in February, which established him as one of the country's best up-and-comers.

The middleweight fight between Marcos Antonio Santana and Hernani Perpetuo ended in controversy. The first round was very active, all fought standing. Perpetuo ended up suffering a cut on his eyebrow which forced the doctor to stop the fight during the break despite the complains from all of the Nova Uniao team. Nova Uniao leader and Shooto Brazil promoter Andre Pederneiras has secured a rematch between the two for an upcoming edition of the event. 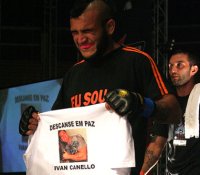 G. Venga
Lineker paid tribute to a friend
with a first-round win.
Experienced featherweight Johnny Eduardo dominated his fight against Jose Wilson. After spending weeks in Holland training with former K-1 Max champion Andy Souwer, Eduardo was sharp in all aspects. In the third Eduardo locked up a rear-naked choke to take the win at 2:57 of the final frame.

Natalense Lightweight Anistavio Medeiros, better known as "Gasparzinho," forced Lucio Curado to tap out to a heel hook 50 seconds into the second round.

In a flyweight contest, Bruno Azevedo sunk a rear-naked choke to tap William Campos at 2:25 of the first round.

In the opening bout of the evening Leo Pinheiro won a unanimous decision over Vinicius Boneco.