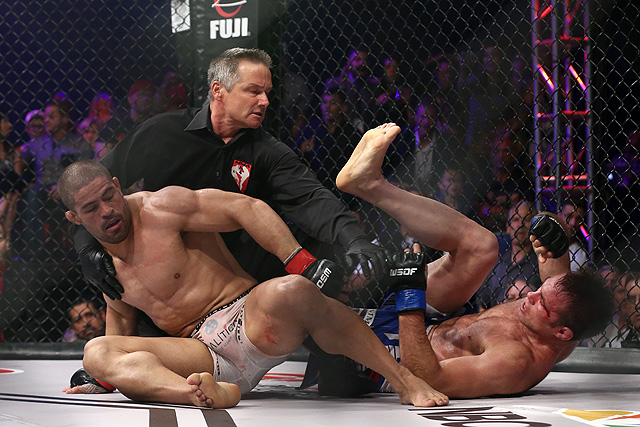 
Failing to release yet another submission in a timely manner has cost World Series of Fighting welterweight champion Rousimar Palhares dearly.

WSOF President Ray Sefo announced during an appearance on ”The MMA Hour” Tuesday that Palhares has been suspended indefinitely by the promotion and stripped of his 170-pound belt. “The fact is that he may never fight for us again,” Sefo told Ariel Helwani during the interview.

Palhares submitted Jake Shields with a kimura 2:02 into the third round of their headlining encounter at WSOF 22 on Aug. 1. However, Palhares held the maneuver for several seconds too long, cranking after Shields tapped and still holding on as referee Steve Mazaggati attempted to separate the two fighters. Shields then threw a punch at Palhares in frustration.

After the bout, Shields called Palhares a “dirty fighter” and also accused the Brazilian of gouging his eye repeatedly earlier in the bout.

In addition to the WSOF’s discipline, Palhares is likely facing a fine and suspension from the Nevada Athletic Commission. WSOF 22 took place at the Planet Hollywood Resort and Casino in Las Vegas.

Palhares has a well-established reputation for holding on to submissions for too long. Palhares was released from the UFC in October 2013 for failing to release a heel hook in a timely fashion after Mike Pierce tapped out to the maneuver 31 seconds into their encounter at UFC Fight Night “Maia vs. Shields.” It was the second such instance for Palhares in the Octagon, as he was suspended 90 days in 2010 by the New Jersey State Athletic Control Board for cranking the same hold longer than necessary against Tomasz Drwal.