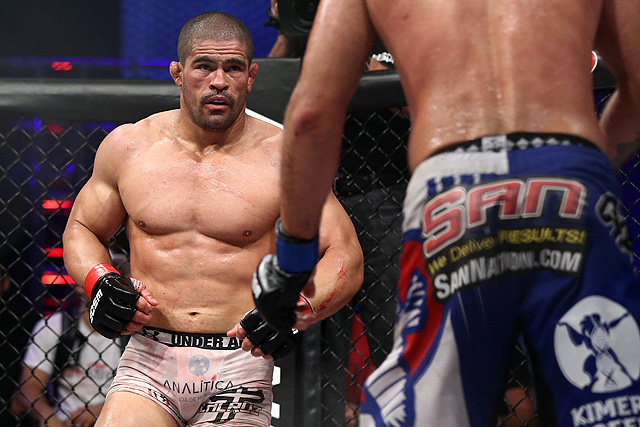 Rousimar Palhares has a history of questionable conduct regarding submissions. | Dave Mandel/Sherdog.com


All things considered, Rousimar Palhares got off with a relatively lenient punishment for his actions at World Series of Fighting 22.

The Nevada Athletic Commission suspended Palhares for two years and fined him $40,000 during a Thursday disciplinary hearing in Las Vegas.

Palhares submitted Jake Shields with a kimura 2:02 into the third round of their headlining encounter at WSOF 22 on Aug. 1. However, Palhares appeared to hold the maneuver for several seconds too long, cranking after Shields tapped and still holding on as referee Steve Mazaggati attempted to separate the two fighters. Shields then threw a punch at Palhares in frustration.

After the bout, Shields called Palhares a “dirty fighter” and also accused the Brazilian of gouging his eye repeatedly earlier in the bout. As a result of his actions, the WSOF stripped Palhares of the welterweight title and suspended him indefinitely.

The ruling came as somewhat of a surprise considering Palhares’ history and that the commission recently handed Nick Diaz a five-year sentence for testing positive for marijuana; however, Diaz and the NAC are in talks for a settlement that could allow him to return as early as 2016.

Palhares, who appeared via Skype, did himself no favors during testimony. The Brazilian claimed he did not see referee Steve Mazagatti and therefore did not know who was hitting his back as the fight concluded. He later added that he thought Shields was kneeing him in the back instead of tapping out. Meanwhile, Alex Davis, Palhares’ manager, said that Mazagatti was not in the correct position to halt the fight in a timely manner.

Mazagatti and WSOF President Ray Sefo both appeared to testify during the hearing. Mazagatti said he explained the rules both verbally and physically to Palhares in the locker room before the fight. The veteran official, who called Palhares’ actions “unsportsmanlike” and confirmed that the fighter held the submission well after he called the fight, said that the Brazilian had expressed concern about Shields utilizing a “fake tap” in the contest.

Sefo meanwhile, echoed Mazagatti’s unsportsmanlike sentiment while revealing that the former 170-pound king had been explicitly warned not about his actions prior to the fight. Davis and Palhares then called referee “Big” John McCarthy to appear as an expert witness and that plan backfired, as McCarthy proceeded to reiterate the notion that Palhares’ actions were indeed unsportsmanlike.

The Brazilian leg lock specialist has a well-documented history holding on to submissions for too long.Palhares was released from the UFC in October 2013 for failing to release a heel hook in a timely fashion after Mike Pierce tapped out to the maneuver 31 seconds into their encounter at UFC Fight Night “Maia vs. Shields.” It was the second such instance for Palhares in the Octagon, as he was suspended 90 days in 2010 by the New Jersey State Athletic Control Board for cranking the same hold longer than necessary against Tomasz Drwal.