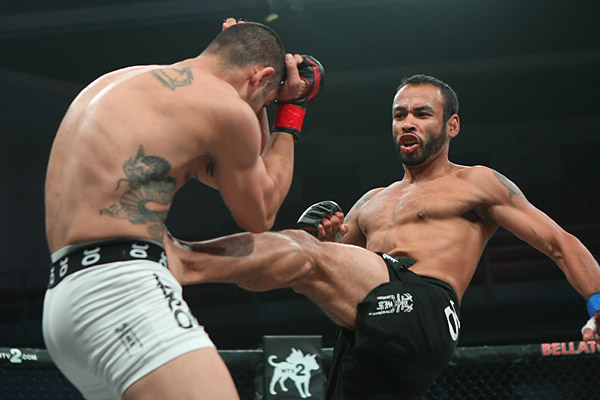 Rudy Bears (right) has been around the block. | Keith Mills/Sherdog.com


Whether it’s mixed martial arts, boxing or kickboxing, crossroads fights are the norm.

Many times throughout every year, there is an up-and-coming young lion ready to reach that next level in his career. Standing in his way is a grizzled veteran who is supposed to lose. Sometimes the young stud loses, but more often than not, the gatekeeper is pummeled.

Rudy Bears is the gatekeeper trying to prevent Michael Page from passing through and onto the next rung up the ladder. Bears knows he’s supposed to get trounced by the unbeaten Englishman, that virtually nobody believes he’ll pull off the upset, but he doesn’t care. He relishes the opportunity to prove that his colorful professional ledger is just filled with numbers, something not indicative of who he is today.

“I’ve heard all that. It is what it is,” he told Sherdog.com. “You can’t count the chickens before they’re hatched or however you want to say it. I’ve been training hard for this fight. I’m in great shape, and it’s not going to be an easy walk, I’ll say that. I’m sure people will call me that now and probably in the future. I know I don’t have a super winning record, but I don’t find it as an insult. They can call me a gatekeeper. Whatever. I don’t care.”

Bears has lost almost as many times as he’s won, but he always fights as hard as he can. There was a stretch between 2009 and 2013 where he lost 10 of 15 fights, including a pair of three-bout skids. While Bears started his career 10-3, things went downhill after a loss to UFC veteran Tyron Woodley. He bounced around between organizations -- including Bellator and Titan FC -- and battled against top-level opposition like Zak Cummings, Paul Daley, Jason High and Ryan Jensen, all of whom competed in the UFC. But Bears is quick to point out that nothing untoward occurred, that he simply came up short in his battles.

“Those were just the ups and downs of life,” he said. “I don’t try to go out an lose any fight, obviously, and I went out and performed to the best I can. Sometimes you lose fights, you get caught… it happens. I lost a couple of Bellator fights back-to-back but I thought I really won those fights. It’s just part of the game. You can’t win every single fight and Michael Page will see that on Friday.”

Page might feel the wrath of a fighter repossessed on Friday night under the lights of Bellator 140. “Bad News” Bears has won two straight and said he feels better now than he ever has before. He took a full year off from fighting to reconnect with himself and to figure out exactly what he needs to do. Bears claims that he’s found it and is ready to shock the unbeaten Brit when they finally meet.

“I just feel as though I’m really hungry right now,” he stated. “I still train the same as ever and I train hard. We train harder at our gym than most other MMA gyms in the country. It’s really starting to come together now. This is a chance for me to prove that I belong in Bellator and that I can beat any guy they throw at me.”

Thus far Page has mowed down everybody he’s faced. Only one man -- Nah-Shon Burrell at Bellator 128 -- has been able to make it to the final bell, but Bears isn’t impressed.

“He’s a karate guy; he does a lot of spin techniques,” he mused. “I used to do a lot of sport karate so I’ve seen a lot of the stuff he does. He’s pretty flashy, kind of like a Power Ranger to me. He likes those spinning techniques and he likes to showboat a little too much, in my opinion.

“I’m sure he will be [cocky] when we fight,” he added. “It’s kind of his perception of the game right now. That’s kind of how he’s making himself famous. I mean, his nickname is ‘Hands Down’ and I’m hoping to change to ‘Hands Up’ after this fight.”

Whether Bears can be the first man to topple Page in the pro ranks remains to be seen. But he said he is more focused than ever before and feels as though he is at his mental and physical zenith. He’s talented enough to get the job done and many a gatekeeper throughout the years has knocked off the surging prospect. Now it’s on Bears to follow in their footsteps.