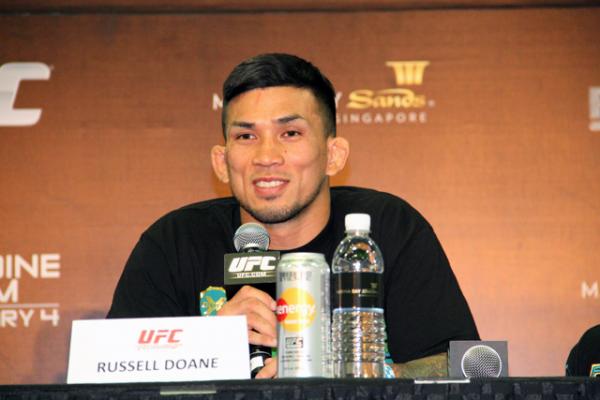 Russell Doane will look for his second UFC triumph against Marcus Brimage on July 5. | James Goyder/Sherdog.com


Russell Doane will square off with Marcus Brimage in a bantamweight clash at UFC 175.

Source close to the fighters’ camps confirmed the matchup to Sherdog.com on Friday. UFC 175 takes place at the Mandalay Bay Events Center in Las Vegas on July 5 and features a middleweight title tilt between Chris Weidman and Lyoto Machida. The holiday weekend card also includes a women’s bantamweight title showdown between Ronda Rousey and Alexis Davis.

Doane made his Octagon debut in January, when he submitted Leandro Issa with a triangle choke at UFC Fight Night “Saffiedine vs. Lim.” The Hawaii Elite MMA representative has been victorious in 13 of his 16 professional appearances overall, finishing 11 of those triumphs by knockout, technical knockout or submission.

A member of “The Ultimate Fighter 14” cast, Brimage makes the drop to 135 pounds after posting a 3-1 mark in the Octagon at featherweight. The 29-year-old known as “The Bama Beast” began his career with victories over Stephen Bass, Maximo Blanco and Jim Hettes before falling to Irish star Conor McGregor in his most recent outing at UFC on Fuel TV 9.