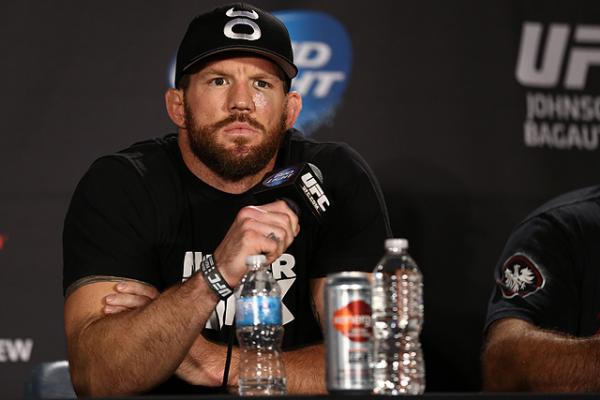 Ryan Bader would like to fight in Phoenix on Dec. 13. | Dave Mandel/Sherdog.com


Ryan Bader relied on to his roots to derail Ovince St. Preux’s momentum.

It was the second straight fight that “The Ultimate Fighter 8” winner grounded his foe repeatedly – he landed seven takedowns against Rafael Cavalcante at UFC 174 --- and imposed his will from top position.

“For a while there I kind of got away from it a little bit,” Bader said at the post-fight press conference. “I feel like all my losses are when I tried to go out there and exclusively kickbox with guys. You know like a Glover [Teixeira, a [Lyoto]Machida, Jon Jones. I need to mix everything up.

“That’ s my strength is wrestling. I need to mix that up with my boxing and everything else. Keep that in my game. I’ve been doing that my last couple fights and it’s been successful,” he continued. “I wanted to get off a little more tonight on my feet, but I couldn’t so I improvised and got it done.”


Unlike UFC 174, when Bader and St. Preux basically laid the groundwork for Saturday’s bout, there was no fantasy matchmaking from the Arizona native.

“I’ve got a few injuries that I need to address right now,” he said. “I’ll just keep my head down and fight whoever they give me. Everything will take care of itself. OSP was a really good test coming off a four-fight winning streak, and now it’s just up to the UFC.”

While Bader doesn’t have an opponent in mind for his next fight, he is partial to a particular destination. The UFC is scheduled to travel to Phoenix for its 13th Fox event on Dec. 13. A spot on that card would be ideal for the Power MMA representative.

That would be nice to get on the Phoenix card. I think that’s going to be a huge card out there,” Bader said. “People are passionate about UFC in Arizona, and they’ve been waiting for a long time. That’s all I hear about -- people asking if I’m going to be on that card, so I’d like to. It makes sense. It’s a good timeline, so I hope so.”