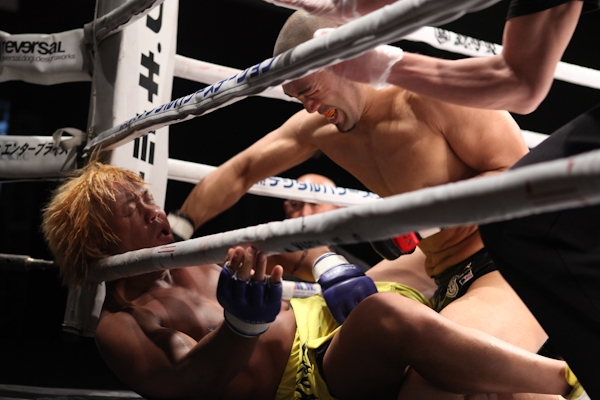 
YOKOHAMA, Japan -- Pancrase celebrated its 20th anniversary on Sunday night at the Yokohama Cultural Gymnasium with a night of exciting fights that felt more than a bit dampened by a series of officiating blunders.

In the night’s main event, Kazuo Takahashi, who made his professional debut at Pancrase 1 in 1993, stepped into the ring one last time to face middleweight King of Pacrase Ryo Kawamura. The 20-year veteran Takahashi looked good early, landing a takedown before latching on a guillotine choke. Kawamura was able to pop his head free, though, and with “Yoshiki” pinned against the ropes, threw a barrage of heavy punches that knocked his opponent unconscious. Referee Yoshinori Umeki stepped in to stop the fight at 1:43 of the first round.

Sakaguchi Dojo’s Isao Kobayashi was able to defend his lightweight title, coming out on top after a three round back-and-forth battle with Yoshiaki Takahashi. The two fighters chose to brawl from the opening bell, though it was the champion who got the best of the exchanges, scoring multiple knockdowns and taking the challenger’s back in the first two rounds. Takahashi was able to rally in the final round and spent some time of his own hunting for chokes from the back. At the end of three rounds the judges were split, with two 29-28 scorecards for Kobayashi and one 29-29 draw.

In the 120-pound flyweight division, champion Mitsuhisa Sunabe took on Noboru Tahara in a three-round title bout. The “Ryukyu Speedstar” implemented his patented style of quick boxing and wild flurries to keep the challenger at a distance and stop takedown attempts in the opening two rounds. In round three, though, it was Sunabe who went for a takedown before finding himself on the receiving end of two dangerous armbar attempts. The champion found his way to his feet and invited “Shinpei” to trade heavy punches with him for the remainder of the bout. Sunabe received solid marks form the judges, earning a unanimous decision win with scores of 30-29, 30-29 and 30-28.

Former Sengoku and Pancrase featherweight champion Marlon Sandro made his return to the Pancrase ring, taking on heavy-hitter Yojiro Uchimura in a grinding three-round affair that failed to live up to its “guaranteed KO” billing. Uchimura took the lead standing, while Sandro looked for takedowns throughout, scoring on a few occasions. At the end of the bout all three judges scored it a 30-30 for a surprising unanimous draw.

In one of the most bizarre displays of officiating in recent memory, Shungo Oyama and Jordan Currie’s middleweight bout was declared a no contest until further judgment can be delivered. The bout ended with a large degree of confusion, as Currie locked up an arm-triangle choke in the final seconds of the opening round. The bell to end the round sounded and Currie continued to hold the choke for a few seconds after, despite referee Ryogaku Wada’s

warnings. When Currie finally let go, Oyama was asleep, sparking controversy over whether he went out before or after the bell. No one bothered to translate this for Currie, who continued to celebrate a win while a swarm of officials entered the ring to deliberate. After much replay-watching, the judges decided to hold off on the decision, though they scored the fight for one round anyway, with Currie having his arm raised despite a no-contest call.

In more strange officiating, Satoru Kitaoka took on an overweight Dom O’Grady in Pancrase’s World Slam tournament opening round. Due to O’Grady weight mishap, the fight would be scored a no-contest if the American won, but would continue as a win if Kitaoka came out as the victor. Luckily, Kitaoka made quick work of the matter, putting O’Grady to sleep with a guillotine choke only 1:19 into the bout.

Another former SRC champion, Masanori Kanehara, made quick work of his foreign opponent, knocking Joe Pearson out cold with a counter right hand at the 20-second mark of round one.

In a fight to decide the next middleweight title-challenger, ADCC veteran Shinsho Anzai out-muscled American Will Noland en route to a TKO victory via punches at only 2:32 of the first round.

In an astereotypical case of the home fighter being screwed by the judges, Shinji Sasaki found himself on the losing end of a baffling “must” decision after three rounds of outjabbing a very uncomfortable looking Bogdan Cristea. Though Cristea did little but eat punches for two of three rounds, he finished the fight with scores of 30-29 and two 29-29’s, with the tournament format leading to a “must” decision in his favor.

Japanese strongwoman Rin Nakai extended her unbeaten streak with a close decision win over veteran Tara LaRosa in women’s action. Nakai used her strength advantage to negate what she lacked in reach, chopping at LaRosa’s legs with kicks and smothering her on the mat while looking for submissions. In the end, the judges all saw it differently, giving scores of 30-29 and 30-28 for Nakai and one 29-29 draw, making Nakai the winner by split decision.

At lightweight, Richie Whitson made quick work of Hiroki Nagaoka, putting him to sleep with a guillotine choke at 2:00 of round one to advance in the World Slam tournament.

Nova Uniao went 2 for 2 on the night, with Felipe Olivieri earning a TKO victory Hiroki Aoki after a big flying-knee at 4:16 of the first round, while Marcio Cesar submitted Yuki Baba with an armbar only 1:23 into the fight.

Earlier in the night Taichi Nakajima took a unanimous decision victory over American Top Team’s Sirwan Kakai, while Takafumi Ito submitted one-time retiree Yukio Sakaguchi with a kimura at the 1:28 mark of round two.