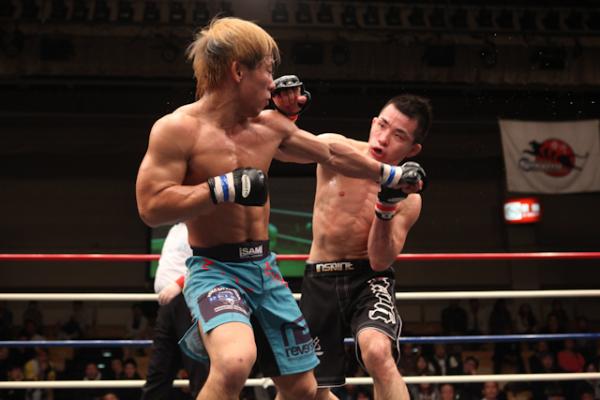 
TOKYO -- Despite many of the seats in Korakuen Hall being empty, Ryuichi Miki and Yosuke Saruta’s rematch for the vacant Shooto world 123-pound title brought the small crowd to a fever pitch Saturday night.

After five rounds of heavy striking exchanges in the main event of Shooto “5th Round 2013,” it was Miki who walked away the champion in his third attempt to capture the belt.

The fight opened with plenty of punches, both men seemingly determined to avoid the same indecisive results of their five-round draw in July. The second round saw Miki begin to pull ahead, showing much improved takedown defense and beating Saruta to the punch. 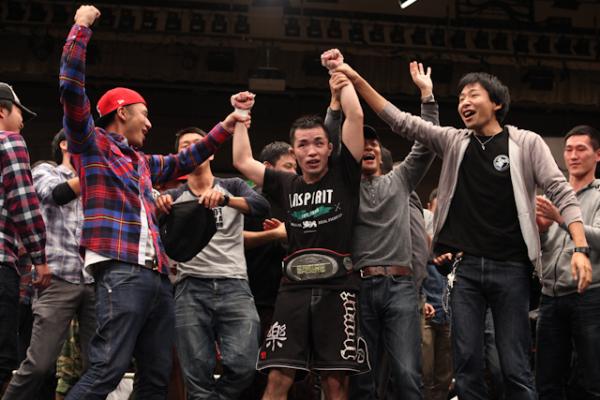 Photo: D. Marchand/Sherdog.com
The third time was the charm for Miki.
By round three, Miki was firing on all cylinders, stunning “Flying Monkey No. 2” with a right hand and following through with big combos. Saruta held on but spent the rest of the round getting torn up with combinations from his veteran opponent. Miki slowed down a bit in the fourth and fifth rounds, but he still kept his sizable point lead, sealing the deal with a lightning-fast takedown in the final seconds of the fight.

Miki’s skillful boxing display earned him scorecards of 49-46 across the board, making the Saitama native Shooto’s fourth 123-pound champion and improving his record to 15-6-4.

“This is my first time going 10 rounds with one guy,” said Miki post-fight. “I didn’t expect it to take that long to earn the belt, but this definitely isn’t the pinnacle of my career and I’ll only get stronger from here.” 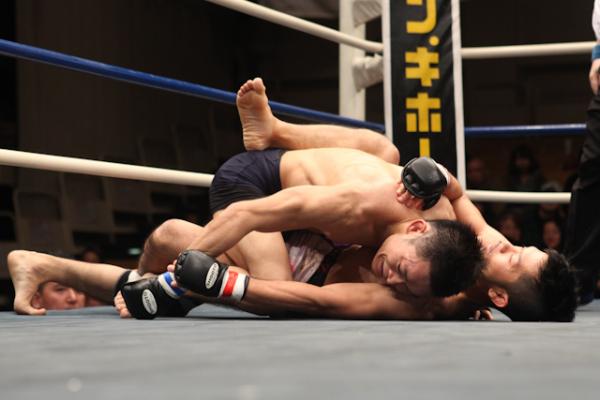 “Nobita” Naito, whose in-ring persona is based on classic Japanese comic series “Doraemon,” used methodical takedowns and guard-passing to control Yamamoto on the mat for three rounds. Despite being unable to finish, Naito earned 30-27 scores from all three judges, moving him closer to the top of the division.

At 132 pounds, Keita Ishibashi made quick work of BJJ specialist Hideto Okada, jumping on Okada’s back in the opening seconds and sinking a fight-ending rear-naked choke only 1:26 into the first round. The win gives Ishibashi an even 4-4 fight record.

Krazy Bee’s Toshiro Chihama emerged victorious over Hitoshi Ogasawara in a rather dull, clinch-filled affair at 143 pounds. Ogasawara spent most of the fight pinning Chihama in the corner, but showed little offense and even less defense in the few striking exchanges of the match. Chihama’s aggression earned him 20-19 scorecards from judges Kanno and Suzuki, while judge Yokoyama saw it a draw at 20-20.

In a 123-pound fight, Tomohiro Hagino scored a multitude of takedowns and survived a late armbar attempt to score a split-decision victory over Yusei Shimokawa. The win improves Hagino’s record to 2-3.

Strawweight veteran Atsushi Takeuchi moved to 9-10-3, tapping Tomoaki Ota with a guillotine choke at the 1:46 mark of round two, while Yutaka Saito earned a unanimous decision win over debuting Takanori Gulliver.

Earlier in the night, Yoshinori Suzuki knocked out Yoshikazu Fujiishi with a flurry of punches 1:49 into the second round, while Hideki Sato and “Tank” earned one round apiece en route to a two-round unanimous draw.