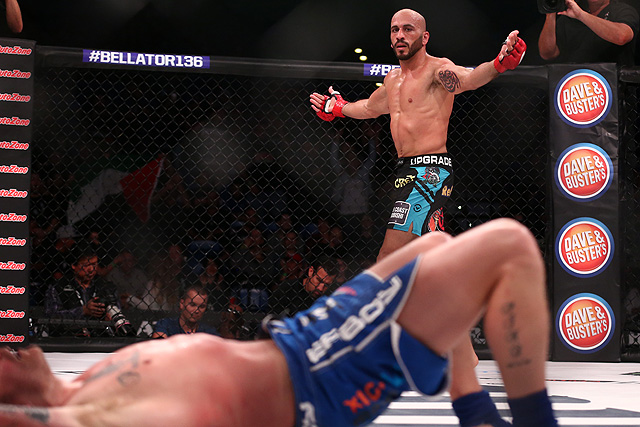 
The first two meetings between Saad Awad and Will Brooks were a study in contrasts.

In their first fight at Bellator 91, Awad shocked Brooks with a 43-second knockout victory -- the first and only defeat of the American Top Team product’s professional career. Their rematch took on a decidedly different tone, as “Ill Will” grounded his opponent repeatedly en route to a unanimous verdict.

That triumph was part of Brooks’ current seven-fight tear, a streak that includes back-to-back wins over Michael Chandler and his first successful title defense against Dave Jansen at Bellator 136 last week.

Not surprisingly, Awad feels the need for closure in his rivalry with the promotion’s reigning lightweight king.

“I think it has a cool story behind it, something to get the fans interested,” Awad told Sherdog.com. “Things went my way fast and went his way pretty boring. In the last couple fights, I became a better fighter. I think he also became a better fighter and a lot more confident on his feet. I think a trilogy will turn out to be a lot more of an interesting fight than the last one.”

Although Awad is generally not the most outspoken character in a sport full of outsized personalities, it’s clear that the path Brooks took to victory in their rematch still bothers him.

“He went out there and he fought just to win,” Awad said. “He picked apart my weakness at the time, and he did a good job of it. I let myself get frustrated. I definitely think he went the safe route of securing the victory in our last meeting.”

The usually reserved Awad even tagged Brooks in a Twitter post ahead of their fights at Bellator 136, a gesture to which the champ did not take kindly. That led to a brief bit of social media banter between the two lightweights.


For some reason I'm on the undercard AGAIN. You can only hide me from @illwillbrooks86 for so long. @BellatorMMA pic.twitter.com/tio7pDdlSa

“He got butt hurt because I tagged him in something. I wasn’t attacking him at all,” Awad said. “He was quick to say something, which I knew he was gonna be. He’s probably always gonna be bitter against me. I’m the only person to beat him.

“I’m pretty sure anytime he has a chance to say anything about me or anytime my name gets brought up, he’s going to be real negative and have something to say.”

Awad is currently riding a three-fight winning streak of his own, including a decision victory over Rob Sinclair at Bellator 136. Whether that’s enough to propel him to the top of the division remains to be seen. Awad is well aware that fighters like Marcin Held, who authored an impressive win over Alexander Sarnavskiy on the same card, and Michael Chandler, always a promotional favorite, are also in the mix.

While “The Assassin” is unsure of Bellator’s plans for him, he says he will stay ready in case his name is called to face Brooks next. If that doesn’t happen, he’s willing to do whatever it takes to get his shot.

“If I have to keep beating people, keep me busy,” he said. “I’ll fight next week if I have to beat somebody else to get a title fight. If not, then give me a freaking title fight. I think I’m ready.”