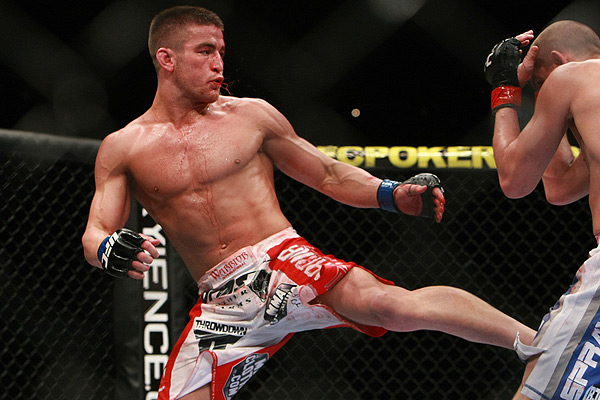 A rivalry that began more than six years ago came to a close Friday night, as Sam Stout took a unanimous decision over Spencer Fisher in their rubber match at UFC on FX 4.

Though primarily viewed as a striker, it was Stout’s wrestling that made the difference in his third meeting with “The King.” Despite generally getting the better of the standup, Fisher could not prevent the Canadian from taking him to the canvas multiple times throughout their lightweight co-headliner.

“It’s something I’ve been working on for a long time, my all-around mixed martial arts game,” Stout (Pictured, file photo) told Fox Sports after the bout. “I know everyone looks at me as just a kickboxer, but it’s something I’ve been perfecting over the years, and I knew it would catch Spencer off guard. It was a good way to steal rounds. I really wanted to make sure I got this win. This was very important for me.”

Despite earning his third victory in four fights, Stout did not walk away unscathed from Revel Atlantic City in Atlantic City, N.J. Fisher’s accurate boxing attack took its toll, as the southpaw continually found a home for his straight left and right hook, closing Stout’s right eye in the process.

“I feel great,” Stout said after the bout. “My right shin is a little sore, and obviously my face is a little swollen, but it wouldn’t be a fight with me and Spencer Fisher without some bumps and bruises. I’m still a lot better off than I was [after our last fight]. The injuries will heal up, but the glory lasts forever, right?”

Stout and Fisher are best known by most fans for their bouts against one another. Stout took a split decision in the pair’s initial meeting, a 2006 bout regarded by many as a classic slugfest. Fisher evened the score the following year at UFC Fight Night 10 in another exciting contest. After winning “Fight of the Night” honors for another 15-minute effort against his rival on Friday night, Stout says that competing against Fisher for the third time cause him to experience some in-cage déjà vu.

“It was a very familiar feeling. There were times before that last round when I was like, ‘Well, here we go, round nine,’” said Stout. “It was a big win for me, especially against Spencer, who was my first opponent in the UFC. To finish that trilogy in [what might have been] his last fight, it’s kind of poetic. At the same time, I got my first win without Shawn Tompkins in my corner, so that’s a big weight off my shoulders.”

Tompkins, Stout’s late coach and brother-in-law, passed away last August at the age of 37. Stout’s victory tonight marks the first win for “Hands of Stone” since the passing of his longtime friend.

“Everyone has been telling me that Shawn is always going to be in my corner, but without him there physically, it’s very difficult for me to get in the gym every day. It’s been a big transition for me to come up with my own game plans,” said Stout. “Mark Dellagrotte was a big help in breaking down what I needed to do in this fight. I had a great team behind me on this one, and they did a great job of helping to fill Shawn’s shoes.”