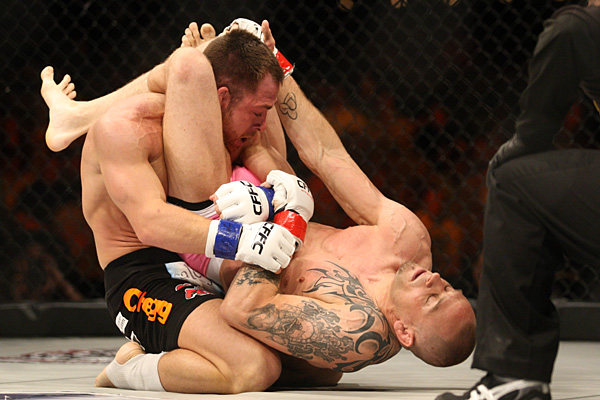 Doing his part to set up a match with Makovsky, Santella made a fourth successful CFFC title defense by using a nasty triangle to put Dave Morgan unconscious in the first round.

“Shorty Rock” was at ease early, casually looking for an opportunity to grapple with the West Scranton, Penn., fighter. When Morgan finally took Santella down, the AMA Fight Club rep slipped his legs over Morgan's neck and locked up a picture-perfect triangle. Though Morgan tapped, he went unconscious just a moment later, flopping over unconscious as Santella released the triangle at 2:28 of round one.

Santella, now 13-3-1, has won eight of his last nine bouts. His lone loss in that span came at 135 pounds to unbeaten standout Aljamain Sterling in October 2011.

Makovsky's flyweight debut was not flawless, but his powerful grappling got the job done against the crafty Claudio Ledesma, earning the former Bellator bantamweight ace scores of 29-28 (twice) and 30-27.

Ledesma tested “Fun Size” at a few points in the bout, but Makovsky's wrestling carried him through. Though his hands still looked to be a work in progress, the former Drexel University wrestler did land several head-snapping combos on his foe. Makovsky was also forced to weather a late surge from Ledesma, who almost completed a mounted guillotine at the end of the third round.

“I didn't defend top position as quickly as I could have. The fight seemed like a blur to me; I never know what they look like,” Makovsky, now 15-4, told Sherdog.com after the bout. “But, I think this is the best weight for me to be at.”

Sherdog.com learned following the two fighters' victories that a flyweight title bout between the two is tentatively scheduled for CFFC 26 on Aug. 17, back at Atlantic City's Borgata Hotel and Casino.

"I've trained with him a couple times,” Makovsky mentioned of his potential foe Santella. “He has really good jiu-jitsu. It'll be a tough fight everywhere.”

Becker put together the round of his life in the first, bullying Sullivan in the clinch, bringing him to the ground and working effectively on top for most of the frame. In the second, however, it was Sullivan that was able to bully Becker. When Becker rolled to avoid punches, Sullivan poured on the offense, eventually sneaking an uppercut through Becker’s guard to knock him out a la Dan Henderson on Fedor Emelianenko.

The fight, the last on Sullivan's CFFC contract, moves him to 12-3 with just a single loss in his last 10 bouts.

At 155 pounds, Paul Felder and Corey Bleaken engaged in a back-and-forth affair. Felder almost secured a rear-naked choke early in the first round but Bleaken was able to wriggle out of it. The judges scored the bout 30-26, 29-28, 29-28 in favor of the Philadelphian Felder, who moves to 5-0 in his young career.

Also at lightweight, Jonathan DelBrugge entered the cage to WWE superstar The Undertaker's theme song, but his fight proved a painful “shoot” if anything: Derrick Kennington knocked him cold with a heavy one-two just 99 seconds into their contest.

Middleweight Michael Wilcox secured a rear-naked choke on Eric Roncoroni at 3:33 of the first round. The Buena, N.J., native took his opponent down and was able to cinch the final choke without any hooks in.

In a welterweight tilt, Brian Collins dominated the bout with strong wrestling and ground and pound. He took a unanimous verdict (29-26, 29-27, 29-27) over Kyle Dunn despite being docked a point by Dan Miragliotta in the second round for illegal punches to the back of the head.

Elsewhere, light heavyweight Jose Pinto earned his first career pro win, punching out Darren Costa at 4:35 of round two; lightweight Robert Fabrizi took a plodding unanimous decision (30-27, 29-28, 29-28) over Alfred Alo and Jonavin Webb defeated Steven Wempler via rear-naked-choke at 1:44 of round one.