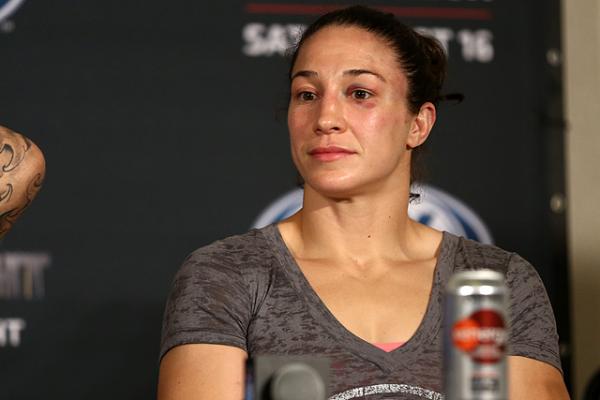 
Sara McMann believes everyone in the women’s bantamweight division has place in line -- and that goes for potential UFC employees as well as current talent.

The Olympic silver medalist relied on her wrestling to capture a methodical split decision over former Invicta FC bantamweight queen Lauren Murphy at UFC Fight Night "Bader vs. St. Preux" on Saturday night. It was McMann’s first appearance since a 66-second loss to reigning 135-pound champ Ronda Rousey at UFC 170.

McMann has heard all the talk about Gina Carano signing with the Las Vegas-based promotion, but she doesn’t believe the former Strikeforce star deserves an immediate title shot.

“I know that they’re talking about different fights for Rousey,” McMann told media members following her victory in Bangor, Maine. “I truly believe that Cat Zingano deserves the next title fight. She is the one that has more than shown that she is next in line. I’m not about cutting in line.”

That doesn’t mean McMann would turn down a rematch with Rousey. She would just prefer to earn her way back. And besides, there are a few things the 33-year-old South Carolinian could stand to improve.

“I do play fair, and maybe it’s to my detriment, but I wouldn’t mind having another fight before I go on to fight Rousey -- especially after the things that I saw [in the first fight] that I really would like to work on,” she said. “And I love to fight, so I want to fight everybody. I don’t care when if it’s when I have the title, before I get the title, whatever.”

In the meantime, McMann wants an opponent that can propel her back to No. 1 contender’s status. She believes that Miesha Tate fits that bill.

“I’m definitely eager for the rematch, but if they want to throw me out there against someone like Miesha Tate [that would be good too]. Somebody I know that’s willing to face the challenges,” she said. “I’ve struggled with people wanting to fight me, but she’s somebody that steps up to the plate. She’s somebody who’s going to get in there.”

Despite her best wishes, most of the women McMann mentioned are already booked with matches in the near future. Zingano faces Amanda Nunes at UFC 178, while Tate is set to lock horns with Rin Nakai at UFC Fight Night in Japan. Carano, meanwhile, remains a high-profile free agent.

Still, McMann isn’t backing down from what she feels is right, and that doesn’t include any free passes to the top of the division.

“I just operate on a sense of fairness, and Cat earned an actual title shot. She fought for a title contender shot. It was unfortunate she had two things that kept her out but it doesn’t change the fighter that she is,” she said. “The best fighters should be fighting the best. Even if I feel like I’m one of the best fighters in the world, [Zingano] deserves her shot.”