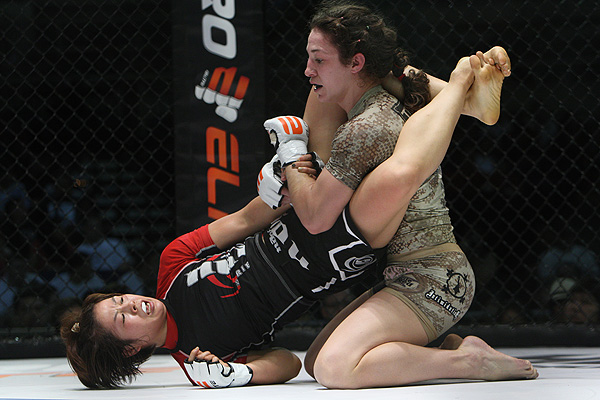 Sara McMann does not understand the hate surrounding her opponent. | Photo: Dave Mandel/Sherdog.com


Ultimate Fighting Championship women’s bantamweight titleholder Ronda Rousey has not won over many fans since she coached opposite Miesha Tate on “The Ultimate Fighter 18” and then refused to shake the hand of her defeated archrival at UFC 168.

Sara McMann, Rousey’s challenger in the UFC 170 main event on Saturday in Las Vegas, has been taken aback by some of the champion’s critics.

“I think people are getting way, way, way too worked up about her personality,” she told Sherdog.com. “Some people are treating it like they hate her. I’m like, ‘Really? There are people in this world who you should hate and there are pedophiles or people who beat up old people and take their money. There are some rotten, despicable people who are orchestrating genocides in other countries, and yes, if you’re going to hate anyone, then by all means, hate them; but really to hate a girl just because what she says aggravates you?’ I just don’t think it’s worthy of hate. It’s someone that you wouldn’t invite to your Christmas party, but worthy of hate? I don’t see it. I mean, I just think that it’s so blown out of proportion.”

McMann, who will enter the Octagon as a heavy underdog despite a perfect 7-0 professional record, does not feel any additional pressure to defeat Rousey because of those who dislike her.

“Truthfully, I wouldn’t count those people on my side as much as I would count them against Ronda,” she said. “If you’re a fan of me, it’s because you have seen my fights and you like the way that I fight. If you just want her to get beat, I don’t feel like you’re a fan of mine. I feel like you’re someone who has a preference that somebody loses.”

Although media attention swirls around Rousey, McMann wants to maintain focus on herself.

“I’m very much a worry-about-yourself kind of girl,” she said. “That also comes from my wrestling background. You can’t control anyone else’s conditioning, their strength, their speed or whatever. You’re wasting your time sitting around thinking about all these things that they’re doing or not doing, even the things they’re doing to their detriment.

“In wrestling, we’d say, ‘Oh, this girl goes out and parties, and this girl’s not doing this right, she’s not eating right,’ but then that girl would beat you, so really those things that you’re thinking about didn’t even matter,” McMann added. “Focus on what you can control, which is yourself and your own growth and how you compete. That’s all you can control.”