Murayama was surprisingly effective in the first round, jabbing and low-kicking with the champ. Late in the first frame, the Gutsman Shooto Dojo product tripped Sato to the mat, landing in the judo press, where he dropped several hammer fists. The second round saw the challenger maintain his momentum, getting the takedown to sit in Sato’s half guard and in side mount, where he rained big punches to the face.

“Murayama came to bang in our last fight, but this time was different. He was mindful of keeping his range,” Sato admitted after the bout. “Last time, he couldn't see my strikes, but this time he could and out-boxed me. He did his research on me well, and I thought that he managed to sway the judges. That worried me.” 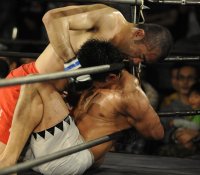 P. Benjamin
Murayama controlled Sato but
didn't get the nod.
In the final minute of round two, Murayama went for a sloppy armbar attempt, which Sato easily defended and used to reverse his way into mount, where he spent the remainder of the round chipping away. However, the challenger had a strong final round as well, putting his definitive stamp on the round after getting an early takedown to smash the champion with hard shots from above.

The bout was not the first encounter between the two, as a June 2009 meeting saw the Gracie Barra Tokyo product hustle Murayama on the feet to take a unanimous decision at Shooting Disco 9.

“I need to defend this Pacific Rim belt again after tonight’s performance," said Sato. "Today was not an exciting fight, and I want to excite the fans next time.”

In the “Fight of the Night,” featherweight Naohiro Mizuno’s right jab paid dividends against the wily Yuta Nezu, as Mizuno took a majority decision after two rounds.

The southpaw Mizuno timed Nezu’s kicks and made sure that his right hand was ever in his opponent’s face, occasionally following up with stiff left straights that dizzied Nezu. Mizuno was less disciplined in the second, however, allowing Nezu to rack up hard, unchecked low kicks -- his best and only offense of the fight -- without returning fire. As such, Mizuno only just took the nod on two judges’ cards, 20-19 and 20-18 from Watanabe and Suzuki respectively. Judge Yokoyama saw the bout a 19-19 draw. 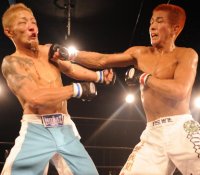 P. Benjamin
Mizuno (right) outpunched Nezu.
Shin Kochiwa put away Kazuya Satomoto early in the second frame of their lightweight contest with superior punching. After working Satomoto’s face over with hard right-hand counters that shut his left eye, a savage left hook-right cross combination put Satomoto on the retreat. Kochiwa followed with a brain-rattling right uppercut that put Satomoto on the mat for good 87 seconds into the period.

Daiki Takashima simply could not grapple like Kota Onojima could in their 132-pound matchup. For two rounds, Onojima dirty boxed and pounded Takashima from top position, taking three 20-18 scorecards.

Lightweights Koji Nishioka and Hideto Kondo fought a blood-and-guts two-rounder to a majority draw (20-19, 20-20, 20-20) with both men landing punches evenly for 10 minutes.

Rumina Sato pupil Akinobu Watanabe was disqualified just 52 seconds into his flyweight bout with Tatsuya Nakashima for an inadvertent kick to the groin that ended “Nakashi’s” night. 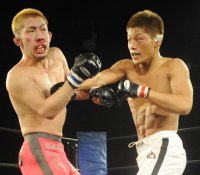 P. Benjamin
Ato (right) battered Tomozawa.
Tomozawa tried with all his might to bring the fight to the canvas early, but Ato deftly defended with excellent posting skills and head control, marking and bloodying Tomozawa’s face in the process. Elsewhere, Ato hunted Tomozawa down with prejudice, landing sharp punches and kicks to the body while Tomozawa swung with abandon, missing by wide margins.

With both men tiring, the fight devolved into a bloody brawl in the second round. By the final 45 seconds, both strawweights were toe-to-toe, smashing one another with weary punches. Ato took scores of 20-17, 20-18 from 20-19 from Suzuki, Watanabe, and Watanabe respectively, and advances to the semifinals.

In the featherweight bracket, Paraestra Tokyo’s Minoru Takeuchi impressed against K’z Factory representative Hideto Okada en route to a majority decision win (20-18, 20-19, 19-19). The first round saw Takeuchi threaten with an extended anaconda choke and an omoplata, while the second saw him show off sharp counter punches and leg kicks. Takeuchi will meet the winner of the yet-unscheduled Kenta Sakuma-Kenji Yamamoto quarterfinal. 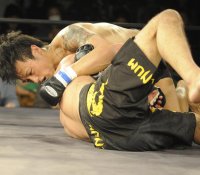 P. Benjamin
Takeuchi showed his grappling and
his striking.
In a 154-pound rookie tourney bout, Yohei Ota and Yusuke Kasuya excited by trading top position and blistering ground-and-pound, until Kasuya took Ota’s back in a scramble and choked him out at 4:14 of the first. The Jin Akimoto student advances to face Yoshikazu Fujishi in the quarterfinals. Also in the lightweight bracket, Paraestra Matsudo’s Nobumitsu Taison narrowly edged Jin Suzuki (20-19, 20-19, 19-19) on the merit of stuffing takedowns and lobbing a handful of low kicks late in the second frame. Taison will face the winner of the forthcoming Bunpei Umezono-Katsuyoshi Beppu quarterfinal.

In 123-pound rookie action, Paraestra Hachioji’s Kotaro Hagiwara savaged Yuta Horikawa on the feet before finishing with a rear-naked choke at 3:46 of the first.