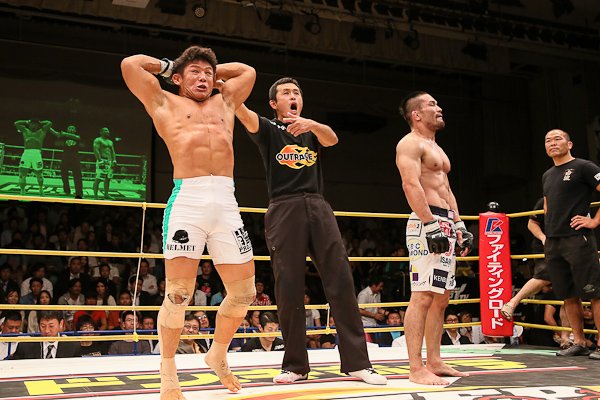 TOKYO -- “I entered this fight believing it was 'kill or be killed,'” said former Sengoku lightweight champion Satoru Kitaoka after besting fellow Dream veteran Katsunori Kikuno in the main event of Deep 58 Impact at Korakuen Hall on Friday.

“I feel I survived. Before this fight, I imagined that I could submit Kikuno. He had very good defense though, so I could not finish,” he later admitted.

In typical Kitaoka fashion, the former Sengoku champ harassed the deadly karateka with repeated takedown attempts, only succeeding to put Kikuno down early in the first and third frames. Kikuno's defensive abilities kept him safe from Kitaoka's brute-force submission attempts however, as he escaped numerous guillotine chokes and arm lock attempts whenever he was in the grappler's guard, standing or on the ground. 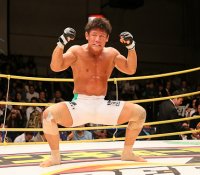 Taro Irei
Kitaoka was excited in victory.
Throughout the bout, Kitaoka surprisingly also landed a small sum of lunging left straights to Kikuno's jaw--a punch the grappler employed well to mask his many takedown attempts. Kikuno, for his part, returned fire with counter punches and his patented crescent kicks, but they did little to slow Kitaoka down.

“I thought that I'd get hit by his kicks, but I didn't worry too much about it. I didn't want to completely change my style just based off of worries that I'd eat kicks,” said Kitaoka.

The grappler's most decisive moment came in the final five minutes as a Kitaoka takedown put Kikuno on his back in a ring corner.

Kitaoka then cleverly used the ring ropes to trap Kikuno and give leverage to his choke attempts. The stubborn Alliance product escaped these submissions as well, but he was otherwise unable to fight back to his feet while under Kitaoka's stifling smash game. Once he'd passed to side control, Kitaoka began dropping punches and knees to Kikuno's body before latching on a gag-inducing guillotine attempt in the final ten seconds.

For his persistence, judges Moritaka Oshiro, Samio Kimura, and Akira Shoji awarded the bout to Kitaoka, who improves to 30-11-9 with this victory.

Evoking the throwback UWF style, Nakamura treated fans to a barrage of go-for-broke submission attempts, diving for armbars, Achilles holds, and heel hooks. Kishimoto proved more than capable of defending against the Dream veteran's best moves however, narrowly escaping from a fully-extended armbar in the second round and similar attempts in the third. 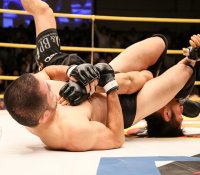 T. Irei
Nakamura's grappling earned him
the Deep lightweight strap.
Whenever Nakamura dove for a leg, Kishimoto would answer by spinning out and blasting Nakamura in the face with punches. Though both damaging and impressive, Kishimoto's defensive chops did little to ingratiate him with judges Kenichi Serizawa, Yoshinori Umeki, Oshiro, Kimura, and Shoji however. For his persistent offensive onslaught, all five championship judges gave their nods to Nakamura.

“I'm still not strong enough,” said the newly crowned but humble lightweight kingpin. “I will continue to train hard, and I will defend this belt for a long time.”

Astra veteran Tatsunao Nagakura blasted Hideki Kadowaki with big punches in their featherweight bout, bowling the former Shooto world champion over with a lunging overhand right in the opening moments. Somewhat prematurely, Nagakura raised his hands in victory then, allowing the Shootor to return to his feet. Nagakura quickly remedied the situation by applying more punches to Kadowaki's face, sending him to the canvas two more times. That proved three times too many for referee Umeki, who called the bout at 3:35 of the first, giving Nagakura the TKO victory.

Dream veteran Daiki Hata fought conservatively with Makoto Kamaya in their bantamweight bout, sealing up what should otherwise have been a tidy decision victory. Racking up low and middle kicks, "Dj.taiki" put ugly red welts on Kamaya's lead leg and body for the first two frames.

Kamaya rebounded in the final period however, wobbling the Dream vet with a big left hook after surviving Hata's dizzying flurry earlier on. Though Sherdog.com had Hata winning at least two rounds, only judge Serizawa appeared to agree with his Hata scorecard, while judges Oshiro and Umeki instead ruled the bout a draw.

After surviving through heavy offense in the first period, Toshiaki Kitada tapped out Katsunori Tsuda in a crackling featherweight bout. Caught with a blistering one-two during a scramble, a dazed Kitada had to recover while under heavy fire, surviving until the bell. Tsuda attempted to re-create this frenetic pace in the second frame, but his overzealousness landed him into a Kitada guillotine, where he was forced to tap at the 1:26 mark. 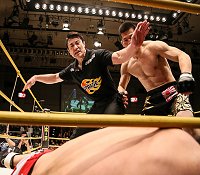 T. Irei
Nagakura cracked Kadowaki.
At welterweight, Naoki Samukawa fended off Yuki Ito's early takedown attempts before putting him on his back to impose his own ground offense. The battle became particularly one-sided in the second frame, when Samukawa stole Ito's back and bashed away with short punches, stealing the bout on judges Serizawa, Shoji, and Umeki's cards.

Kosuke Umeda grappled Won Sik Park to a dominant decision in their lightweight bout, taking the Korean to the canvas to rain punches from guard and back mount. "Parky" had little offense on the feet and virtually none on the ground, resulting in judges Shoji, Serizawa, and Oshiro giving the lopsided bout unanimously to Umeda.

Welterweights Shigetoshi Iwase and Yusaku Tsukumo traded rounds controlling each other's back to battle to a majority draw, while at bantamweight Yoshiki Harada sent an already dazed Tomohiko Hori sprawling into the ropes with a flurry of punches for the knockout at 3:58 of the first round.