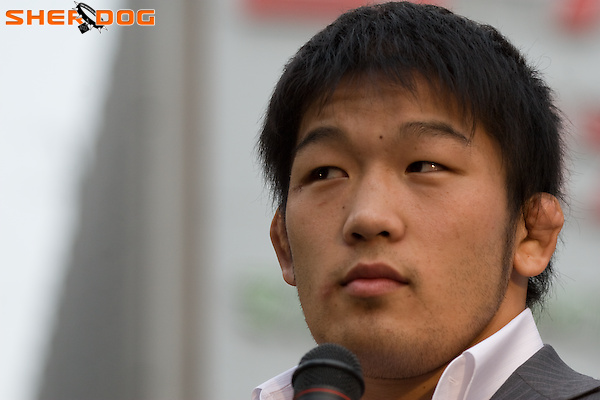 
Satoshi Ishii extended his win streak to eight with a unanimous decision win over Philip De Fries at Inoki Genome Fight 1 on Saturday at Ryougoku Sumo Hall in Tokyo.

After an unsuccessful UFC stint, De Fries was looking for a second successive win under the banner of Antonio Inoki’s promotion, having stopped Brett Rogers on New Year’s Eve. The Englishman made a promising start, scoring with knees and working unsuccessfully for a standing guillotine choke.

Midway through the opening round, Ishii showcased the judo skills which brought him Olympic gold in 2008, executing two consecutive trips and landing in side control on both occasions where he was able to control De Fries without doing any serious damage.

The second stanza started with the heavyweights exchanging punches, but again Ishii was able to use the same trip to put De Fries on his back. This time, the UFC veteran succeeded in working his way back up but received a warning from the referee for having grabbed the ring ropes during the process. Ishii’s strategy was simple but highly effective: he kept a high guard when his opponent was looking to score with hooks and uppercuts, and then took him down whenever the opportunity arose, inevitably landing in side control.

Ishii was able to do this once more before the end of the round. Again, De Fries prevented the Japanese heavyweight from landing any effective strikes, but having spent so much of the fight in a dominant position, it was inevitable that Ishii would get the unanimous nod from the judges.

In the co-main event, Ikuhisa Minowa scored the 59th victory of his professional career. The win came via first-round submission against overmatched Swedish debutant Goran Jettingstad, who looked well out of his depth against the Japanese veteran and succumbed to an Achilles lock at 2:26 of round one.

Guram Gugenishvili elected to wear wrestling shoes and quickly took down Tony Bonello, throwing punches from side control which caused the referee to step in and stop the action at 3:34.

In the night’s other significant heavyweight matchup, a quickfire combination of punches from former Strikeforce title challenger Brett Rogers concluded with a right hook to the chin which knocked Yusuke Kawaguchi out cold just 0:28 into the opening round.

In earlier action, Ramazan Esenbaev drew with Yuki Yamamoto; Amaramend Boldo won a decision over Atsushi Sawada; Bob Armstrong knocked out Shinichi Suzukawa with a punch at 2:00 of round one; and Tsuyoshi Kurihara submitted Yusuke Masuda with an armbar at 3:38 of round one.