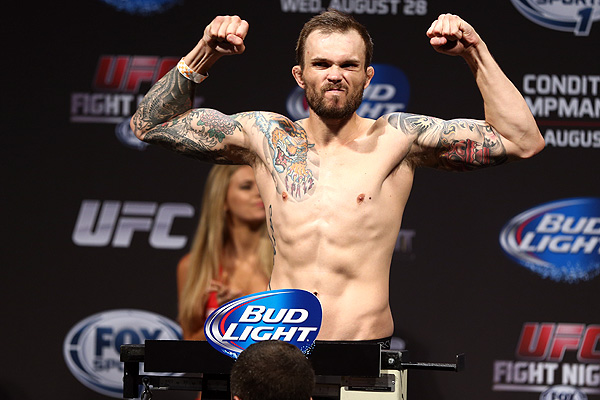 
Saul Rogers earned the most significant victory of his career to date, as he outpointed five-time UFC veteran John Maguire in the Cage Warriors Fighting Championship 65 headliner at the Helix in Dublin on Saturday.

All three judges -- David Lethaby, Barry Oglesby and Andy Sledge -- scored the lightweight tilt in favor of Rogers, who improves to 7-1 as a professional. It was just the second time the 24-year-old has gone the distance in victory.

Maguire did not go quietly. “The One” had a strong start, taking his opponent down and spending much of the opening frame attached to his back. Maguire’s confidence in his ground game worked against him in round two, as he failed on a guillotine attempt and spent the rest of the frame unsuccessfully hunting for submissions with Rogers in top position. “The Hangman” fired off a late flurry of ground-and-pound to close out the round.

A closely contested third round saw little offense of consequence, with both fighters jockeying for position before trading takedowns in the final minute. However, Rogers was often the aggressor inside the cage, which likely helped to seal the victory for the Team Colosseum product.

In the co-main event, “The Ultimate Fighter: The Smashes” alum Ben Alloway halted a two-fight skid with a unanimous decision triumph over 39-fight veteran Jack Mason. All three cageside judges scored the welterweight bout 29-28 in favor of “Benny Blanco.”

It was Alloway’s striking prowess that made the difference. The Australian hurt Mason with a knee in round one and had success throughout landing accurate kicks and punches. Although it was not a high-volume assault, his output on the feet far exceeded that of Mason.

Mason did his best to wear his adversary down by driving for takedown attempts against the fence, and while the Essex, England, native was able successfully ground Alloway on multiple occasions, he was unable to offer any significant offense from top position.

Earlier, Alex Enlund once again proved that he is not someone you want attached to your back. The 26-year-old Sixth Sense MMA representative earned his ninth career submission victory, tapping out Artem Lobov with a rear-naked choke 2:21 into the opening round of their featherweight encounter. It is Enlund’s third straight triumph via rear-naked choke while competing for the Cage Warriors promotion.

Enlund’s intentions were clear from the outset, as he dragged Lobov to the ground, took his back and sunk in both hooks. From there, the English fighter gradually slid his arm under his opponent’s chin, eventually rendering Lobov unconscious and forcing referee Rich Mitchell to halt the fight.

Damien Rooney submitted Bryan Creighton with a triangle choke in the second round of a 130-pound catch-weight affair. The end came 2:10 into the period, but Rooney had to do some work to secure the tapout. After exchanging on the feet, Creighton closed the distance and landed a takedown against his lanky foe. That would be the beginning of the end, however, as the Irishman gradually inched his legs into position for the choke. Eventually Rooney was able to lock the triangle into place, make the necessary adjustments to tighten its grip and bring an end to the bout.

A relentless offensive approach carried Paul Redmond past Damien Brown in a lightweight clash. All three judges scored the bout 29-28 in favor of the Dublin native, who has won six of seven inside the CWFC cage. Brown had his moments in the opening frame, threatening with a guillotine and landing solid ground-and-pound, but Redmond gradually assumed control with a steady diet of top control, submission attempts and punches from above over the bout’s final 10 minutes.

In the opening main card contest, Dublin native Philip Mulpeter earned a first-round technical knockout over Frenchman Aldric Cassata 3:13 into the opening round of their 160-pound catch-weight scrap. The SBG Ireland representative folded his opponent with a knee to the body and then swarmed with punches on the ground to earn his second victory under the CWFC banner.

In preliminary action: Lee Caers submitted Merv Mulholland with a rear-naked choke 3:12 into the second round at welterweight; Catherine Costigan garnered a hard-fought split decision (28-29, 29-28, 29-28) over Irene Cabello at 105 pounds; Paddy Pimblet took a unanimous decision from Martin Sheridan at bantamweight; Konrad Iwanowski captured a split verdict (29-28, 28-29, 30-27) over Shane Gunfield in a 176-pound catch-weight affair; and Neil Ward earned a technical knockout against Gavin Kelly 2:58 into the first round at 135 pounds.