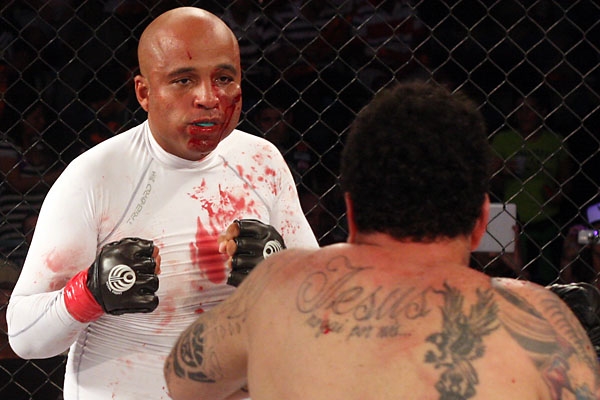 It isn’t often that the opening fight of an MMA show attracts more attention than the main event, but that was the case at Jungle Fight 39. When Jaime Marcelo entered the cage at the Rio de Janeiro Municipal Club on May 12, all eyes were on him.

The reason for all the extra interest: Marcelo is an alleged swindler, accused of falsifying his credentials as an MMA fighter to obtain coaching contracts at academies and even give lessons to celebrities. According to Marcelo, his list of famous students includes Cameron Diaz. Marcelo also calls himself a world champion of “real fight” -- which he claims is an evolution of MMA -- and boasts an unofficial record of 134-1.

A representative of Diaz reportedly denied that the actress even knew who Marcelo was, but Marcelo insisted in a recent interview that Diaz was present at one of his self-defense seminars. Marcelo’s record, however, is easily contestable: there is no proof of his “championship,” and not one of his supposed 135 fights has been recorded in the Sherdog.com Fight Finder.

Fighters in many parts of the world, particularly Brazil, face difficulties when attempting to register their bouts on the Fight Finder, mainly due to lack of standardization and poor dissemination of results by promoters. But most of these fights can be verified and were witnessed by many people. Such is not the case with Marcelo’s fights, only one of which -- filmed on a cellphone -- has been uploaded to YouTube.

By way of his dubious credentials, Marcelo appeared on several TV shows in Brazil and even wrote a self-help book which is available for sale in one of the country’s largest bookstores. Angered by the man they labeled “the greatest deceiver in MMA,” forum users on Sherdog.com partner site Portal do Vale Tudo (PVT) began “chasing” Marcelo, leading to page after page of topics related to him.

The PVT forum was predictably abuzz when Marcelo announced that an April MMA event in Sao Paulo would have the participation of soccer club Portuguesa -- who had recently hired Marcelo -- as well as sponsorship from Ferrari and coverage on CBS. After 250 pages of controversy and outrage over the announcement drew coverage from major media outlets, Portuguesa released Marcelo from his contract.

Forum users also bombarded the Twitter account of Wallid Ismail, a Brazilian vale tudo icon and promoter of the country’s biggest MMA event, Jungle Fight. Fans asked Ismail to arrange for Marcelo to compete at the next Jungle Fight and prove that he was really a fighter. Ismail agreed, and Marcelo readily accepted a bout against Armando Polemico, a student of Francisco Veras, who was recently hired as Anderson Silva’s new muay Thai coach.

In the opening bout of Jungle Fight 39, Marcelo had the opportunity to showcase his skills on national television. He entered the cage in a white rash guard, trying unsuccessfully to disguise a Roy Nelson-like physique. Polemico entered to the cheers of the fans, and together they put on a fight which, while lacking in technique, had plenty of emotion. 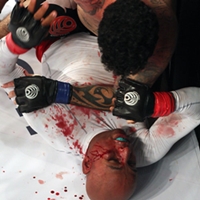 Alan Oliveira
The striking was heavy from the onset. It seemed someone could fall at any time until, only seconds into the fight, an elbow from Polemico cut and raised a massive welt beneath the left eye of Marcelo. After being cleared to continue by the cageside physician, Marcelo pressed forward, lobbing kicks and punches as his blood stained the white rash guard. After 90 seconds, Polemico executed an effortless throw, mounted Marcelo and delivered punches until referee Marcus Vinicius intervened at the 2:34 mark.

Marcelo was taken to the hospital, but only to take care of the damage beneath his left eye. The fighter reportedly asked Ismail and Jungle Fight co-promoter Bebeo Duarte for another fight with Polemico, to improve his official record which now stands at 0-1. Ismail didn’t answer the rematch request, but he did offer some kind words for Marcelo.

“Just for stepping into Jungle Fight’s cage, he’s a warrior,” said Ismail, “and he deserves my respect.”