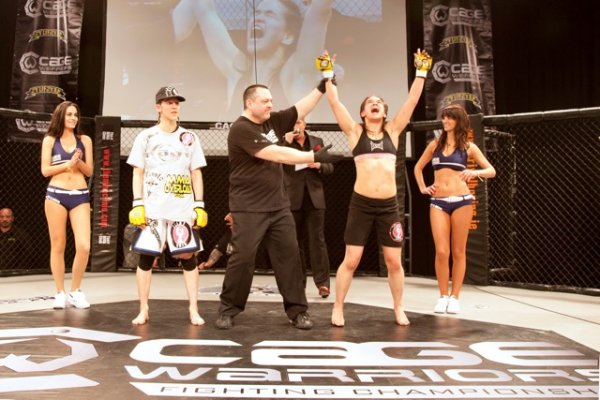 
It was neither pretty nor surgical, but Rosi Sexton edged out a win against Roxanne Modafferi in the highly competitive main event of Cage Warriors Fighting Championship 40 at London’s HMV Forum on Saturday.

Both 125-pound women came out slinging leather, with Modafferi mixing in push kicks to keep the shorter Sexton at range. Sexton succeeded in taking the fight to the fence, where the two jockeyed for position and takedowns with over-under hooks. The round was largely a stalemate, with Modafferi scoring with intermittent knees in the clinch and Sexton finally securing a takedown in the waning seconds.

Sexton needed less time -- roughly 90 seconds -- to drag Modafferi down in the second, but was unable to advance past the rangy American’s guard once there. Modafferi threatened with an armbar from the bottom and finished the period hunting for a leglock while dodging short punches from Sexton.

“To be honest, I never really felt threatened,” Sexton, 33, remarked in her postfight interview. “There were a few things that took a little bit of time to work my way out of, but there was nothing that was so tight that I was worried.”

In the final round, Modafferi opted to pull guard and once more grabbed at Sexton’s limbs, prompting Sexton to allow the “Happy Warrior” back to the feet. After another guard-pull, Sexton nearly snared a transitioning Modafferi in a standing rear-naked choke, but could not find the proper angle and eventually settled for slamming Modafferi back to the floor. Though clearly tiring, Modafferi finished strong, locking Sexton in a triangle choke for the last half-minute of the bout.

In the end, all three judges saw the bout in favor of Sexton. One judge awarded the Englishwoman all three rounds with a score of 30-27, while the other officials’ cards of 30-28 and 30-29 reflected the close nature of the fight.

“I knew Roxanne was going to be tough to put away,” said Sexton. “She’s shown a really tough chin in previous fights. I knew the key was going to be taking her down and working ground-and-pound from top position.” 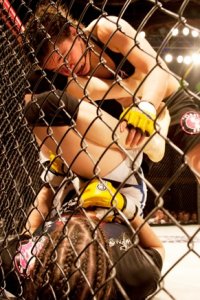 D. Clew
Modafferi was active on her back
but couldn't sink a sub.
In the evening’s co-main event, Scotland’s Paul McVeigh retained his CWFC bantamweight title with a second-round stoppage of German judoka Andreas Bernhard.

McVeigh launched head kicks and hooks at his 5-foot-1 opponent before Bernhard closed the distance and initiated the clinch. The champion found his punching range late in the opening round and drilled Bernhard with a hard knee as the German changed levels.

Bernhard looked to keep it close in the second frame, pulling guard early, but McVeigh instantly passed to side control and then mount. Pinning Bernhard’s throat to the canvas with his hand, McVeigh threw hard shots from the mount which caused his challenger to squirm and cover up. Once it was clear that Bernhard had no escape, referee Neil Hall stepped in for the stop at the 2:57 mark.

“We knew Andreas was going to try and get underneath me, so I wanted to get him a little bit tired in the clinch,” McVeigh said after the fight. “When I get on top of people, I can usually finish them. I’m pretty good on top.”

Iceland has been put on the map by outstanding prospect Gunnar Nelson. However, it was Nelson's teammate, “The Ice Viking” Arni Isaksson, who recorded his third straight arm-triangle choke victory, tapping late replacement Kevin Reed of Wales at 2:32 of the second stanza.

Isaksson, 27, was originally slated for welterweight action against former Penn State wrestler Eric Bradley. However, Bradley’s recent prison sentence in Centre County, Penn., nixed the fight. Taking on the middleweight Reed, Isaksson was forced to defend strong takedowns early, but took over the fight with his impressive developing submission arsenal.

Reed survived a host of brabo and anaconda choke attempts, but fatigued under the pace of Isaksson, and eventually succumbed to the side choke after taking a beating from knee-on-belly in the second frame.

Duffy ended up on his back quickly, but swept to top position with a brabo choke set-up from the bottom. Duffy, who turned 23 on Feb. 18, quickly took full mount, pounded Maguire, and locked up a topside triangle for the impressive win. The Falcon Martial Arts product has finished all nine of his pro opponents. His lone blemish came in exhibition action, in the elimination round of “The Ultimate Fighter” Season 12, where he was submitted by Kyle Watson in the first round.

Machado got the ball rolling with a torrent of standing elbows that badly rocked Sizeland and put him on the floor. Machado swarmed, but was wise to let Sizeland get back to his feet, where he continued his assault with knees and punches. After dropping his foe again, Machado followed with punches and elbows that forced referee Hall to intervene at just 2:18 of the first round.

French featherweight Ismael Padavia was competitive on the feet against London’s Ashleigh Grimshaw. However, the Brit, used his superior top game and grappling to take a tidy unanimous decision (30-27, 30-27, 30-28), fighting in front of his hometown crowd for the first time since July 2008.

Falcons Martial Arts welterweight Aaron Thomas put on a show, quickly taking Charlie Leary’s back and threatening with a bevy of submissions. Thomas finally abandoned rear-naked choke attempts and coaxed the tap with an armbar at 4:57 of the second frame.

At 155 pounds, Mark Fry pounded out Paul Kingdon at 2:43 of the first round, while Brad Wheeler grounded Hayden Critchfield and tapped him with a rear-naked choke at 2:58 of the first round. However, the most arresting lightweight highlight came when Ian Entwistle locked up a quick standing guillotine on Pat Vickers, and choked him completely limp and unconscious almost instantly on his feet in a mere 20 seconds.