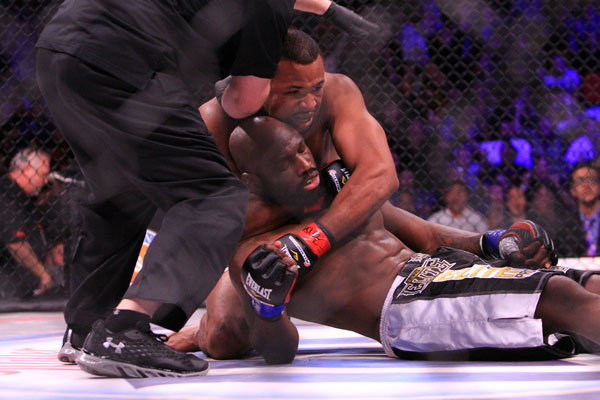 
Shahbulat Shamhalaev has a flair for finishing inside the Bellator cage.

The 29-year-old Russian scored a second-round knockout of Rad Martinez in the Bellator 90 main event, disappointing a vocal pro-Martinez throng at the Maverik Center in Salt Lake City, Utah, Thursday night. Referee Jason Herzog stopped the bout 2:12 into the second stanza. It was the third straight stoppage victory for Shamhalaev, who earned $100,000 and a featherweight title shot against the Pat Curran-Daniel Straus winner at a later date.

“I’d like to apologize to whoever’s mood I ruined today for knocking him out,” Shamhalaev said of the West Jordan, Utah, native. “I think I showed a pretty good fight with every one of my opponents [in the 145-pound tournament]. I showed some good striking and it was a great experience for me, but I’ve got a lot more that you guys don’t know about.”

The first round was closely contested, as Shamhalaev attacked with outside low kicks and sent Martinez tumbling to the floor with a pair of counter left hooks. Martinez recovered quickly, however ,and controlled the second portion of the frame with top control after securing a takedown.

The second period belonged to the “Assassin.” Shamhalaev hurt Martinez with a head kick and continued to attack aggressively from there. An powerful overhand right sent Martinez’s head bouncing off the canvas, and the Red Fury Fight Team representative sealed the deal with one final hammerfist on the floor.


Ever since he signed with the Chicago-based promotion, Muhammed Lawal has had the Bellator hype machine firmly behind him. It was all but a foregone conclusion that “King Mo” would plow through the light heavyweight tournament field and eventually assume his place as champion.

Emanuel Newton had other ideas.

The fighter known as “The Hardcore Kid” shocked Lawal (9-2, 1-1 Bellator), knocking out the former Strikeforce champion with a perfectly-timed spinning back fist 2:35 into the opening frame. With the win, Newton (20-7-1, 3-1 Bellator) moves on to face Mikhail Zayats in Bellator’s Season 8 light heavyweight tournament finals.

Newton held his own in the majority of exchanges, mixing kicks and punches while Lawal, with his lead hand held low, was mostly content to counter. The fatal exchange occurred when Lawal attempted to counter a Newton overhand right with a right hook. His guard down, Lawal crumbled slowly to the canvas once his opponent struck the decisive blow.

“I saw that Mo dropped his hands a lot and coming with big haymakers, so I figured I’d duck under it,” Newton said.


Douglas Lima needed only one punch.

The 25-year-old Brazilian knocked out Bryan Baker with a crushing overhand right in their welterweight bout, clinching his spot opposite Ben Saunders in the finals of Bellator’s 170-pound tournament. The end came 2:34 into the opening stanza.

“I was just timing it, looking to land the right hand. I’m just glad everything worked out good,” said Lima, whose only defeat in the promotion came at the hands of reigning welterweight king Ben Askren at Bellator 64.

The matchup began slowly, with Lima stalking his foe as Baker circled on the outside. Lima attacked patiently with low kicks, while “The Beast” offered virtually nothing in the way of offense on his end. Shortly thereafter, “The Phenom” sent Baker tumbling to the canvas with the massive right hand. He needed just one follow-up punch before referee Jason Herzog intervened to halt the bout.


Mikhail Zayats advanced to the finals of Bellator’s Season 8 light heavyweight bracket, submitting Jacob Noe with an armbar 3:38 into the opening frame.

The Russian sambo specialist dominated from start to finish. He countered a Noe (11-2, 2-1 Bellator) leg kick with a stiff right hand, dropping his foe to the canvas in the bout’s opening moments. With Noe’s mouth bleeding from the shot, Zayats (21-6, 2-0 Bellator) methodically went to work from top position. The Rusfighters Sport Club representative eventually passed from half guard to full mount and punished Noe with a flurry of ground-and-pound.

When Noe attempted to escape from the bottom, Zayats was able to secure the armbar, roll through and get the tapout almost immediately. Zayats has now won seven straight fights overall, finishing all but one of those victories by knockout, technical knockout or submission.